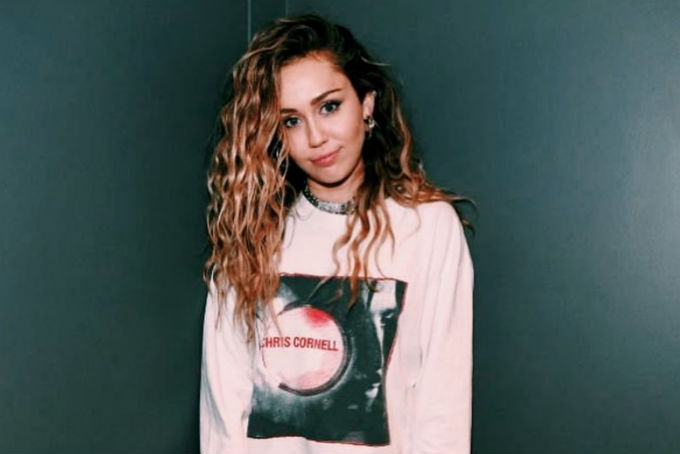 Let’s be real: Miley Cyrus definitely isn’t the first artist you think of when the band Soundgarden pops into your mind. In fact, many fans were a bit upset over her announcement to perform at Chris Cornell‘s tribute show, I Am The Highway, in Los Angeles last week. Cyrus was included on a star-studded lineup along with Metallica, Foo Fighters, Miguel, Ryan Adams, Josh Homme, Fiona Apple, Brandi Carlile and more. Despite Cyrus being a fan of the Seattle grunge scene and occasionally covering bands like Nirvana at her concerts, the crowd didn’t seem super pleased when she took the stage during the five-hour tribute show.

Standing beside Pearl Jam‘s Stone Gossard, Jeff Ament, Josh Freese and Brendan O’Brien, Cyrus asks the crowd, “should we do this?” and begins to belt out Temple of the Dog‘s “Say Hello 2 Heaven.” Sporting an oversized Soundgarden sweatshirt, she stunned the crowd with a forceful, yet beautiful rendition of the popular song. The vigor and impressive strain of her voice portrays how passionate Miley is about the event. Overcome by the intense emotion, Cyrus continually threw her head back during the performance and closed her eyes.

After the final note, the crowd went wild in acceptance of Cyrus’ memorable production. Before leaving the stage, she expressed her gratitude by saying, “Thank you everybody. I f–king wanted to sing this song tonight. We love you, Chris. Thank you for bringing us all together like you always have. It’s a f–king honor. This was the best f–king day.”

Watch Miley perform “Say Hello 2 Heaven” here, and let us know what you thought of her performance in the comments section below, or by tweeting us @soundigest.