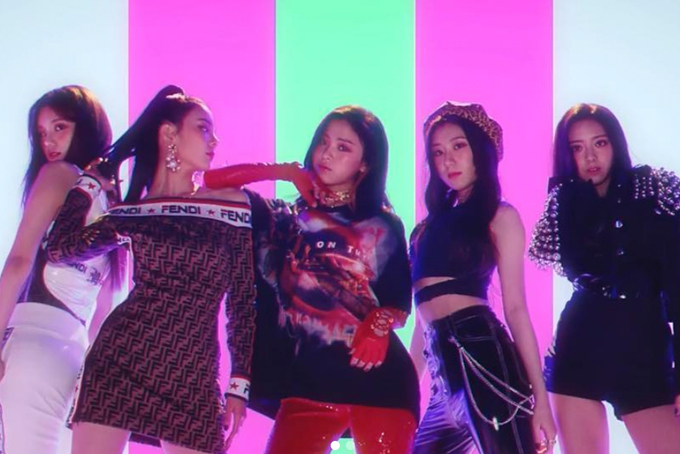 ITZY is comprised of five members: Yuna, Ryujin, Chaeryeong, Lia, and Yeji. Coming from one of the “Big 3” entertainment companies, ITZY is already making headlines for their lineup. Chaeryeong appeared on several shows including K-Pop Star 3 in 2013 and Sixteen, the show that formed TWICE in 2015. Another member, Ryujin appeared on the survival reality show Mixnine last year, and Yeji appeared on The Fan, a music variety show.

The girls of ITZY were revealed in a teaser video that can only be described as a Rimmel London campaign mixed with a K-pop girl crush concept. Playful poses, cheeky attitudes, and high-end athleisure wear show the visual impact these girls have.

While JYP is waiting for the group’s official debut to share more information about them, here’s what we know about each member currently.

Ryujin was born on April 17, 2001. Last year, she appeared on the survival reality show MIXNINE, where she earned the number one spot on the girls’ team. Ryujin has also made a cameo in BTS’s LOVE YOURSELF highlight reel with J-hope and Jimin. She is speculated to be the main rapper, lead dancer, vocalist, and center of the group.

Yuna was born on December 9, 2003. Like Ryujin, Yuna also appeared in BTS’s LOVE YOURSELF highlight reel with Jungkook. It’s rumored that she will be the visual of the group, as well as the lead dancer and a vocalist.

Chaeryeong was born June 5, 2001. She participated on K-pop Star 3 and SIXTEEN with her older sister, Chaeyeon, who is now a part of the monster rookie group IZ*ONE. Chaeryeong has been a trainee for five years, and it’s speculated that she will be the leader of ITZY as well as the main dancer, lead rapper, and lead vocalist of the group.

Lia was born July 21, 2000. Not much is known about Lia. She was an SM Entertainment trainee before joining JYP Entertainment. Lia is fluent in English, and it’s speculated that she will be the main vocalist.

Yeji was born May 26, 2000. It’s speculated that Yeji will be the main dancer, lead rapper, and a vocalist of ITZY, but this has yet to be confirmed. Yeji trained with JYP Entertainment for three years. She competed on The Fan last year but was eliminated. Junho of 2PM referred to Yeji as the “hidden weapon” of JYP.

JYP Entertainment is considered one of Korea’s biggest entertainment companies. With groups like Wonder Girls, TWICE, miss A, 2PM, and GOT7 paving the way for them, ITZY will have no problem skyrocketing to the top of the charts.