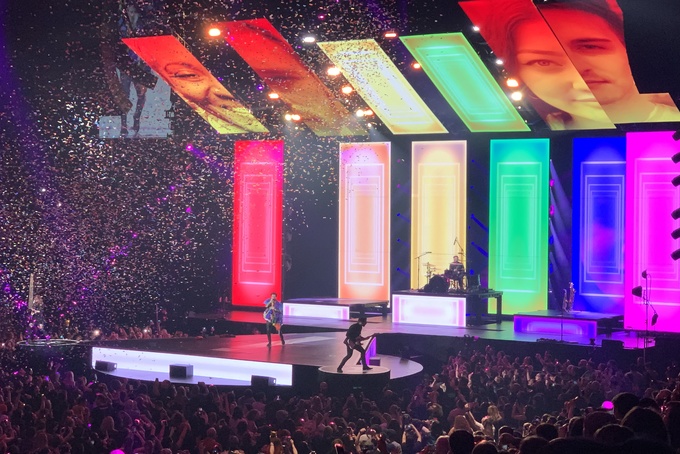 OMG, you guys! Panic! At The Disco stopped by New Jersey’s Prudential Center on Friday, January 18, and we can’t get over how amazing it was! The pop-punk band from Las Vegas, Nevada started their second North American leg of the Pray For The Wicked tour in Buffalo, New York back on January 10.

The band had two openers — Betty Who and Two Feet — who both crushed their sets and got the crowd hyped up for what was to come. “I Love You Always Forever” and “Human Touch” are two of the seven songs she performed with high energy and pure girl power. “Go F–k Yourself” and “I Feel Like I’m Drowning” are our top picks from Two Feet’s nine songs they showcased.

After the countdown placed on the big screen got to 00:00, frontman Brendon Urie literally stole the show by popping out of the stage’s toaster to start off with their upbeat tune “(Fuck A) Silver Lining.” The concert only got better from there with old songs like “Ready To Go,” and more recent hits like “Hey Look Ma, I Made It.”

Ya know what they say, team work makes the dream work 🙌 thanks to each & every one of you 😘

Two of the overall crowd favorites of the night that aren’t Panic! songs seemed to be “The Greatest Show” from The Greatest Showman movie, and the classic fave Bohemian Rhapsody by Queen. Both covers were nothing short of amazing, and they each showed off Brendon’s extreme vocal range and natural talent. The high notes he was hitting could definitely break glass.

Brendon even teamed up with Asbury Park Brewery to create a limited edition beer to be sold at their show at Prudential Center and the brewery while supplies last. The beer is an IPA with an ABV (alcohol by volume) of 6% and it comes in a uniquely packaged yellow can. To make it even better, Brendon signed beers for twenty lucky buyers! How cool is that?!

#Repost @asburyparkbrewery … PANIC! PROMO ANNOUNCEMENT: Brendon Urie has signed 20 six pack carriers for our can release Saturday 1/19. These have been placed on random six packs, even we don’t know which ones. 20 lucky beer drinkers will get an autographed six pack tomorrow!!

If you haven’t seen Panic! At The Disco live yet, we definitely recommend hitting up their show ASAP. However, if you can’t get out to one of their concerts, here’s playlist with the entire set list from the show:

Haven’t seen Panic! yet but still want to? Check out the rest of their U.S. Tour Dates HERE to see if they’re coming to a city near you.