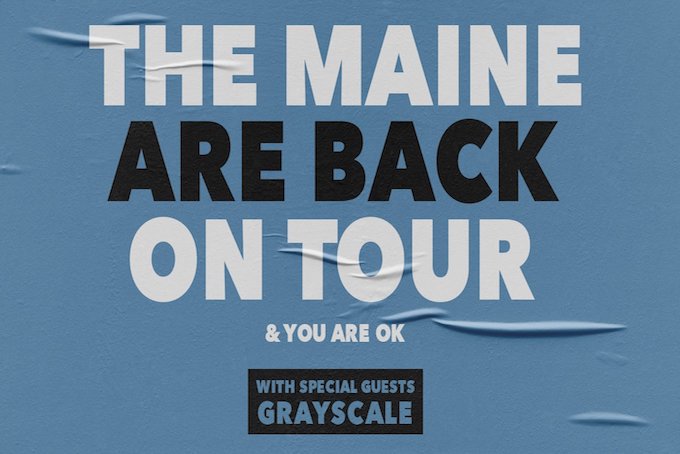 In case you were wondering, The Maine has been busier than ever lately. The band has been working on new music around the clock and put on their signature 8123 Fest this past weekend. Since the release of their last full-length record Lovely, Little, Lonely back in 2017, the Arizona natives have been touring non-stop, and have recently begun teasing the prospect of their 7th studio album.

Well, you guys, we’re happy to say that the teasing phase is finally over. The band dropped the lead single off the upcoming album and announced an official March 29 release date for You Are Ok. The single, “Numb Without You,” gives us a taste of what this new era of The Maine has in store.

The upbeat track is driven by intense orchestral strings, and the chorus sings “You are the violence in my veins // You are the war inside my brain // You are my glitter and my gloom // I am so numb without you.”

The Maine’s fans will definitely have this song on repeat as we all not-so-patiently wait to see what’s next from the band.

Speaking of what’s next, The Maine announced a North American tour this spring with the support of Philadelphia-based band Grayscale. The tour, titled The Maine Are Back On Tour & You Are Ok, begins on May 9 in Tucson, Arizona and finishes May 31 in Albuquerque, New Mexico.

Along with tour dates, The band also announced the opening of their official 8123 retail store in their hometown of Phoenix. Fans made sure to stop by as they enjoyed all the festivities the band put together for them this past weekend.

As you can tell, The Maine always seem to be up to something, so keep a close eye on them as we await You Are Ok. While you’re waiting, though, check out the tour dates here: