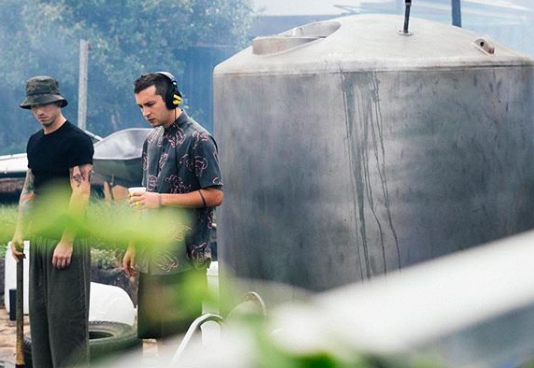 Twenty One Pilots just released their latest music video for their single “Chlorine,” and they were very excited to introduce fans to their new friend Ned. Ned is an adorable animated creature that Tyler Joseph and Josh Dun encounter in the video.

The music video begins with Tyler and Josh taking on the roles of pool boys by filling up an empty worn down swimming pool with hose water. That’s when they first come across Ned. The adorable creature comes out of hiding to curiously observe what Tyler and Josh are doing before hurriedly retreating back into hiding. For the duration of the video we see the duo filling up the pool more and more until it’s almost overflowing with gallons of steaming chlorine. Finally, towards the end of the video, Ned gains the courage to take a giant leap into the pool of chlorine. As he dives through the chemicals, his small horns transform into larger antlers.

In the end, Tyler is once again joined by Ned, except this time the pool is empty. As Josh’s hand reaches down and hands Tyler a drink, he hands it over to his buddy Ned and lets him take a sip. While we’re unsure about whether or not they were “Sippin’ on straight chlorine,” we’re really loving this new friendship and we hope this isn’t the last we’ll see of Ned. Twenty One Pilots never fail to gift the fans with amazing videos, and the general consensus is that we’re definitely loving this one.

Be sure to Check out Twenty One Pilots’ video for “Chlorine” below and lets us know your thoughts. Do you think their were any hidden messages in the video? Let us know in the comments below, or by sending us a tweet @Soundigest.