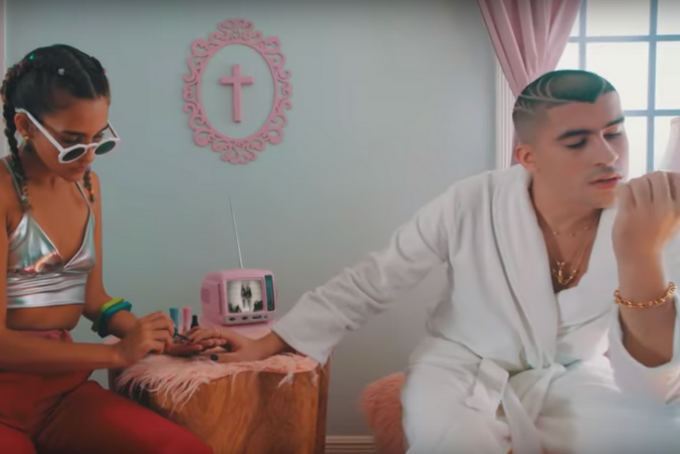 Latin artist Bad Bunny‘s latest music video is a HUGE win and step in the right direction towards overall acceptance, especially of LGBTQ+ for the Latinx community. The Puerto Rican reggaeton singer recently released a music video for his single “Caro” meaning “expensive” in English.>

The song itself is essentially about it not mattering what a person has and to know your self-worth. It’s about being expensive and valuable no matter how you look and live life without worrying about what others think of you.

The video opens with the Latin trap singer in a robe getting his nails painted without care. That scene itself is amazing because, although it is a small thing, men in Latinx cultures are held to traditional gender standards, expected to be tough and manly. Painted nails are perceived as “only a girl thing.” The camera then pans away and back with now a female version of himself played by 19-year-old model Jazmyne Joy.

She takes over singing as him for most of the video, singing around in a pink mansion with a very Bad-Bunny-inspired look. The video also features some unique blurred shots of joy riding around on top of a sports car. It also features a fashion show scene of women of all body types, ages, and even disabilities. Along with these scenes viewed as abnormal in Latinx culture, is Bad Bunny himself—a male artist, pushing the idea of gender fluidity. It’s an important highlight of the video. At the end of the video, he is together with the Joy, and it concludes with a kiss between the two as a sign of self-love and acceptance.

Bad Bunny discusses not caring what others think and knowing his worth when singing “Que con nadie me comparo // Yo llego y normal // Me miran raro // Pero a nada yo le paro // Yo se que cuanta valgo // Yo se que soy caro.”

“Caro” is a great reminder to know your worth—be expensive and valuable no matter how you look, act, your wealth, race, gender or sexual orientation. The video is also a reminder that Bad Bunny did THAT!

You can watch the new video here, and make sure to grab tickets for his upcoming US tour set to take off in March.