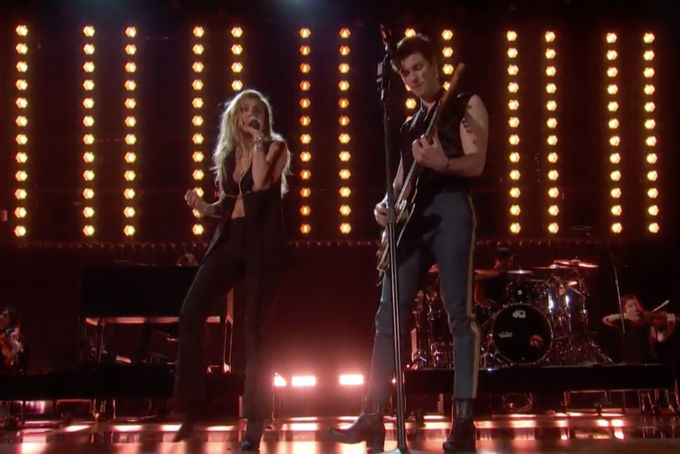 The 61st Annual Grammy Awards have come and gone, and some of the performances this year were truly unforgettable.

15-time Grammy Award winner Alicia Keys hosted the night, and she absolutely killed it. She even performed at one point, slaying us all by playing two pianos at once (but more on that later).

Camila Cabello kicked off the show with a colorful and fun performance of “Havana.” The elaborate stage setup was like a Broadway set with killer choreography to match. The performance had a fun Cuban flair with star-studded interludes throughout, which included latin music icons J Balvin and Ricky Martin.

Shawn Mendes then slowed it down a bit with a gorgeous piano rendition of “In My Blood.” It was a beautiful moment that allowed us to really connect with the song, and just as the intensity of the song picked up, Miley Cyrus joined him for a fabulous duet with some seriously chilling harmonies. The two superstars were much more understated than Camila, but the performance was so uplifting and beautiful.

Kasey Musgraves was the next to take the stage, performing the song “Rainbow” from her Grammy Award-winning album Golden Hour. Her honest and intimate rendition was lovely to watch and listen to. The stage glowed with rainbow LED lights as she stood front-and-center, allowing her voice to speak for itself.

Janelle Monae followed Musgraves, delivering one of the most powerful performances of the night. The futuristic performance was dynamic and fun to watch, and she had such a compelling command of the stage. The performance was a tribute to vaginas, with Monae boldly declaring, “Let the vagina have a monologue.”

Not all of the performances were as absolutely fabulous as Janelle Monae and Kacey Musgraves’, though. the unlikely partnership of Post Malone and The Red Hot Chili Peppers was underwhelming, and J. Lo, Smokey Robinson, and Ne-Yo‘s Motown tribute wasn’t a standout. The performances were fun to watch, but didn’t carry the same wow factor that so many other performances did.

There were several tribute performances throughout the show, including the star-studded tribute to Musicares person of the year, Dolly Parton, which featured Miley Cyrus, Kasey Musgraves, Little Big Town, Maren Morris and Katy Perry. Dolly received a standing ovation the moment she stepped out onto the stage, joining Katy Perry and Kacey Musgraves. Miley gave us chills with her and Dolly Parton’s “Jolene” duet, and Maren Morris joined next. All the performers came on stage for “9 to 5,” giving one of the most memorable performances of the show.

Diana Ross and Aretha Franklin were also honored, with Miss Diana performing in celebration of her own birthday and Yolanda Adams, Fantasia and Andra Day paying tribute to the Queen of Soul.

H.E.R. was totally cool and collected while performing her song “Hard Place,” and it honestly looked like she was having the time of her life on the Grammy stage. It was all eyes on H.E.R. as she sang her heart out. The aesthetic was very ’70s, but at the end of the day, it was all about the music. A gospel choir came out and accompanied her as she showed off everything she’s capable of on the guitar.

Best Rap Album winner Cardi B brought out the dramatics when she took the stage. Her performance was absolutely over the top in the best way. The costumes, choreography and set blew us away. Everything was cheetah print, satin, rhinestoned and totally luxurious, and Cardi B OWNED IT.

Then, Alicia Keys herself got behind the piano for a short two-piano medley of songs she wishes she wrote, leading into her hit “Empire State of Mind.” Honestly, she should do this every year.

Another standout performance from the event was Lady Gaga singing “Shallow” with her co-writers. It nearly brought us to tears. The performance was completely captivating, and no one commands a room quite like Gaga. The A Star Is Born actress was Nominated for five awards, and won three of them before she took the stage. Naturally, she got a standing ovation.

Dua Lipa and St. Vincent were on fire with their powerful performance of “Masseducation,” “R-E-S-P-E-C-T” and “One Kiss” — and just moments later Dua won the award for Best New Artist. The two were one of the last performances of the night — and one of the best!

Head over to https://www.grammy.com/grammys/videos to watch the rest of the performances from music’s biggest night!