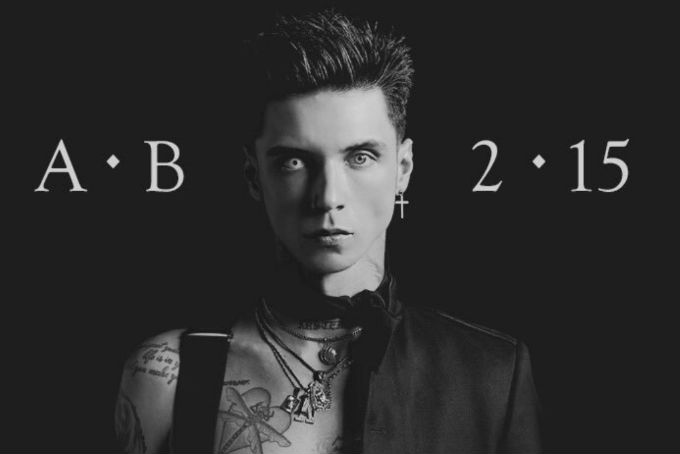 Let’s do a little thought exercise, shall we?

Bring it back to 2010, when we were all wearing shutter shades and neon American Apparel hoodies. A new band has just made a huge splash on the scene. Their aesthetic (and if we’re being honest, their sound too) is heavily inspired by shock-rockers like KISS and Alice Cooper. The band is called Black Veil Brides, and in 2019 their lead singer is going to produce a high-gloss-goth-inspired pop song. Wait, what?

That’s right, you guys! Andy Biersack (or Andy Black, as he’s referred to on solo endeavors) has done just that with his single “Westwood Road.”

The first single off his sophomore solo record, The Ghost of Ohio (set to be released on April 12), “Westwood Road” is a bass-heavy, goth-pop song that is the perfect, logical next step after 2016’s The Shadow Side.

The Ghost of Ohio itself is a concept record, and it’s supposed to soundtrack Biersack’s new comic book with the same name. While Biersack himself isn’t new to the world of concept records (a majority of Black Veil Brides records fall into that category) there’s something different about the way the story is approached in this record — a little less on the nose, a little more incorporated with the overall feel and music, a little more mature.

Indeed, “Westwood Road” opens with a sort of swagger that was missing from Biersack’s older work. The heavily distorted bass line and slinky guitars are a far cry from the synth-heaviness of his first album. Most noticeably, Biersack’s vocals have seemed to evolve — there’s more confidence and a punchier, more self-assured delivery from the singer that has likely been developed in the three years between releases.

Even lyrically, Biersack has clearly improved. “Westwood Road” flows nicely and doesn’t come across quite so melodramatic. Sure, it’s still a little dramatic, but that’s kind of his thing, just like leather pants and Batman.

It’s rare that artists find that happy medium between “evolving their sound” and “putting out the same record over and over again,” but Biersack seems to have landed there with his latest single. If The Shadow Side was a Starbucks Frappuccino, then “Westwood Road” is a macchiato. Still a similar flavor profile, but you’re definitely less embarrassed to admit you enjoy one over the other.

Truth be told, if “Westwood Road” is the future of Andy Biersack (or excuse us, Andy Black) then we’re definitely excited. The evolution from Hot Topic teen idol to genuine entertainer and songwriter is a hard one to tackle, but if anyone could do it, it’s him. And in 20 years time we look forward to seeing that flashy bit of music video on MTV Classic.

(P.S. if you were curious, there really is a Westwood Road, and it is in Ohio. Write what you know, right?)