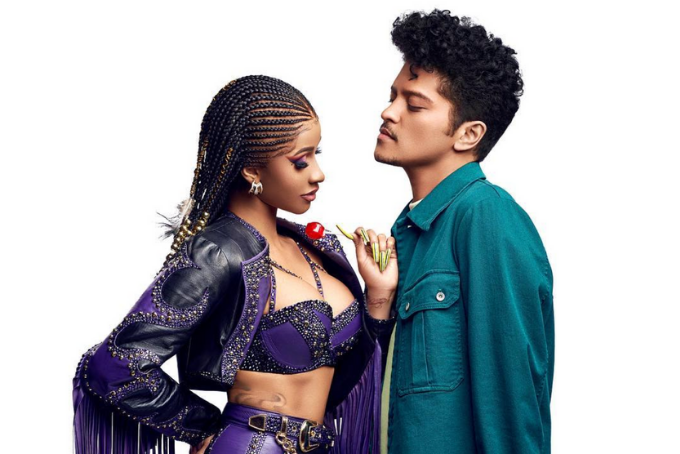 Cardio B and Bruno Mars have done it again. The duo that wowed us with “Finesse” remix has struck gold again on their latest release, “Please Me.” Fans were not disappointed to wake up to the single Friday morning, and we were’t either!

Similar to “Finesse,” “Please Me” has a fun throwback vibe to it. The single—produced by Mars and his usual team—just screams the 90s. The R&B-style track allows both Cardi and the “That’s What I Like” singer to shine at what they do best, with Mars having fun with every run and the newly-crowned Grammy award-winning rapper grabbing your attention with every verse.

The track is definitely slower than most of Cardi’s other songs, sounding more like a Bruno Mars tune than something off of Invasion of Privacy. However, the “Bodak Yellow” singer brings her own strengths to the track, proving she hasn’t shown us everything yet.

Please me on @SPOTIFY ! Hope ya like the record ! I wanted to do something a little different !

Even though it’s a new direction for Cardi, “Please Me” is laid back, catchy, and we can’t get enough of it.

“Please Me” is the second single dropped by the Best Rap Album Grammy winner since her debut album, Invasion of Privacy. She wowed us at the Grammys when she performed her first single since the album dropped, “Money.”

While Bruno Mars has had a quieter year, he took home a whopping six Grammys himself in 2018, and we’d say rightfully so. The two saw massive success after their first collab on Mars’ “Finesse.” However, Cardi B had to drop off the 24K Magic Tour to take care of her daughter Kulture. We hope they pair up for another tour soon so we can see “Please Me” live!

Check it out below and let us know what you think in the comments or by tweeting us @soundigest.