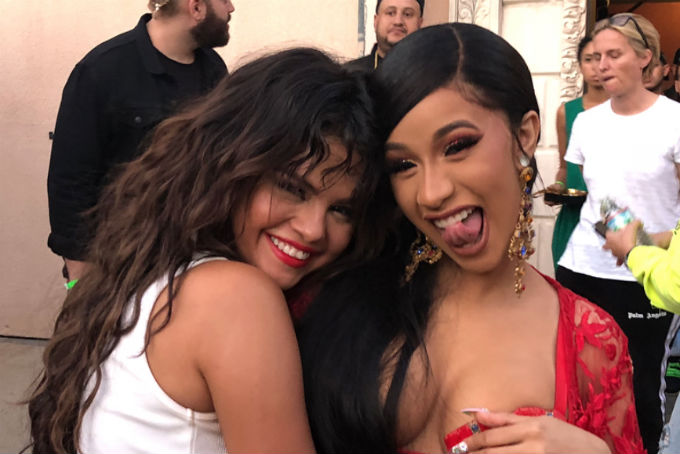 In case you were wondering, Cardi B is still dominating the charts, and it seems like every time you turn around she has another hit collaboration on the radio. Whether you love her or hate her, you have to admit that she’s a master at collaborating, and even if you intentionally try not to sing along to one of her hits, you find yourself mumbling the lyrics anyway.

All that said, new listeners of Cardi B should know that there are some collabs that are essentials and that you must listen to ASAP. Without further ado, take a look at her 7 best collaborations of all time.

Kicking off the year on a great note, this track peaked at no. 1 on the Billboard Hot 100 chart in January 2018. Filled with feelings of nostalgia, this ’90s-inspired track was originally released without the feature, but spiked on the charts when the remix came out.

“Please Me” by Cardi B & Bruno Mars

The newest of Cardi’s collabs brings back the amazing duo, Cardi and Bruno, for a sexy bedroom track that hit in time for valentine’s night.

Bringing in latin flavor and some reggaeton beats, Selena Gomez, Ozuna, DJ Snake and Cardi B released this Spanglish track late last year, and it peaked at no. 11 on the charts in November.

“Motorsport” by Migos, Nicki Minaj and Cardi B

Migos brought together two of the best female rappers for this amazing collab. This song is what some would consider a “flex track,” as it blends the rappers’ styles seamlessly. This hit peaked at no. 9 in November 2017.

“Backin’ It Up (feat. Cardi B)” by Paradise Fontaine

This song was highly anticipated — especially after the break that Cardi took in July, but it still remains on the Billboard Hot 100 chart to this day.

Cardi B made it to the pop charts because of this banger with Maroon 5. The original version of this song was released almost a year before they dropped the remix with Cardi, taking it to no. 1 spot on the Billboard Hot 100 Chart in September 2018.

“I Like It” by Cardi B, Bad Bunny and J Balvin

This latin crossover hit took some inspiration from Pete Rodriguez’s “I Like It Like That (A Mi Me Gusta Asi).” The spicy song blended the latin and hip-hop genres amazingly with Bad Bunny and J Balvin bringing in full Spanish verses. It peaked on the Billboard Top 100 at no. 1 in July of last year.

What’s your favorite Cardi B collab? Let us know in the comments section below or tweet us @soundigest.