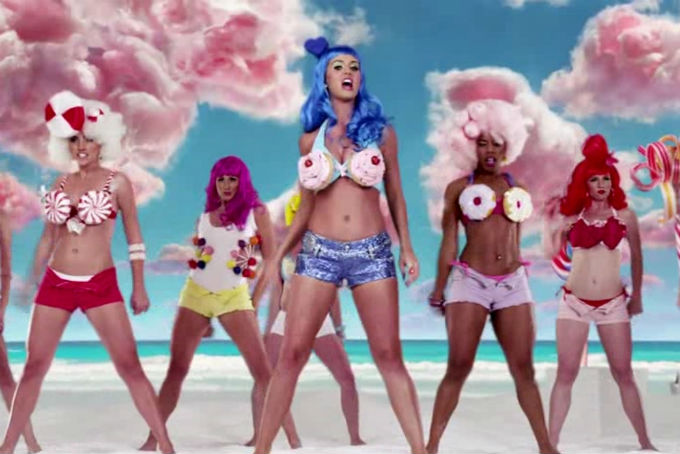 With the release of Katy Perry‘s newest music video for her song “365” with Zedd, it got us thinking about all the great music videos the 34-year-old pop star has given us over her ll-year career. From her “I Kissed a Girl” days all the way to her Witness chart-toppers, Katy’s always known how to wow her fans with high concept music videos that dazzle onscreen. Whether she’s singing “Roar” at the Super Bowl or dancing with Backpack Kid on Saturday Night Live, Perry always brings the kind of fun we know and love her for.

Wondering which music videos we classify as some of Katy’s best? Check out our list of her top five best music videos ever right HERE:

This music video made our number five spot because it’s the sixth video in Perry’s Teenage Dream series. The series focuses on more of Katy’s lovesick songs, which is a departure from most of her top hits that tend to be fluffier pop singles. But “The One That Got Away” is a beautiful portrayal of young love and loss. It follows an older Katy as she reminisces about a love lost. It’s a nice counterpart to the singer’s more produced, commercial music videos.

“Birthday” has to be one of the most underrated music videos in all of Perry’s discography. The singer disguises herself as five different party hosts and goes undercover at unsuspecting birthday parties. Some of her disguises include an elderly showgirl who gives a 90-year-old man a lap dance and an animal wrangler. The pure hilarity that ensues as Perry tries to navigate each party as all these wacky characters is simply the best. All we know for sure is that if Katy wanted to come to our birthday party in disguise, we wouldn’t be mad.

If you’re new to Katy Perry’s music, her first album, One of The Boys, is where the world fell in love with her “cherry chapstick.” The singer was full of angst from the 2000’s punk-rock scene, but with all the fun of great pop music. “Waking Up In Vegas” is a fun and bright depiction of one wild weekend in Vegas. If the song wasn’t such a bop in and of itself, sticking around to see Katy’s many costume changes is worth the watch alone. If you’re not left wanting to book the next flight to Vegas, you’re truly missing out on the pure fun of this music video.

“California Gurls” truly was a revolution. It spawned a plethora of Halloween costumes in 2010 and years to follow. From cotton-candy colored wigs to whipped cream bustiers, this music video is a wild ride through a Los Angeles Candy Land. Also, let’s not forget Snoop Dogg. The legendary “Gin and Juice” rapper is the cherry on top of this upbeat summer music video. Such a classic.

The common theme of most of Katy’s music is that the songs are usually upbeat and fun pop tunes. “Last Friday Night” truly captures the essence of what her early music career encapsulates, which is a fun campy energy. LFN has a lot of fun cameos, such as Glee’s Darren Criss> and Kevin McHale. It also includes an iconic appearance from Rebecca Black, known for her viral YouTube hit “Friday.” In addition to that, ’80s icons including Corey Feldman and Debbie Gibson are in the vid, who play Katy’s nerdy alter Kathy Beth Terry’s parents. Not to mention, saxophonist Kenny G is slated as Kathy Beth Terry’s Uncle Kenny, who plays the Saxophone riff in the music video. It’s little Easter eggs like this that add dimension to the video, making it one of her best of all time.

Well, you guys! That’s our list of Katy Perry’s five best music videos ever. Do you agree? Are there any we missed? Let us know in the comments below or tweet us @Soundigest with your thoughts.