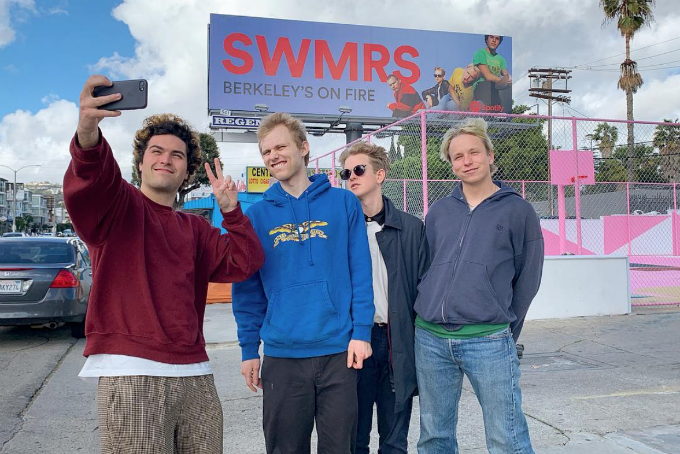 Punk is here to stay! SWMRS just released Berkeley’s On Fire, their highly anticipated follow-up to 2016’s Drive North. The California band blends classic punk with modern pop, pop-punk, emo and surf rock sounds to create one unique album. Berkeley’s On Fire features ten songs that just make you want to dance. With lyrics that are fun, relatable and a bit angsty, it’s hard not to fall in love with this LP.

For those of you who don’t know SWMRS, the band was started by childhood friends Joey Armstrong and Cole Becker. The boys played shows under different names with a few different lineups over the years. Now, Armstrong and Becker, alongside Max Becker and Seb Mueller, worked on the band’s second album via the music label Fueled By Ramen. The band members may be young, but they have a lot of talent and a lot to say. Lyrically, Berkeley’s On Fire addresses what it’s like to grow up in this modern age from dating to politics.

Musically, the album covers a handful of genres, but always has a punk backing. Songs like “IKEA Date” and “Bad Allergies” slow down the album’s pace, providing vibes reminiscent of emo and pop-rock ballads. Tracks such as “Hellboy,” “Lose Lose Lose,” and title track “Berkeley’s On Fire” bring mixes of catchy choruses and loud guitars. The real highlight of the album, however, is “Trashbag Baby.” The single, which is about carrying the weight of a date’s emotional baggage, is infectious. Like much of the album, “Trashbag Baby,” is the memorable, danceable song you want to rock out to in your car or at a show.

Speaking of shows, SWMRS is already taking Berkeley’s On Fire on the road. Crowd surf or bop your head along to your favorite songs in Europe or the U.S. Through touring, the Oakland boys are making a difference by donating part of their ticket sales to important causes. The SWMRS fund supports organizations that help causes such as climate and racial justice. You can learn more about the boys’ causes here.

SWMRS is a great band for younger generations to be introduced to punk music. Berkley’s On Fire will also appeal to rock and punk fans of any age. Their energy is contagious. They’ve already caught the attention of large pop-punk and rock bands. Honestly, we would be surprised if you aren’t dancing to at least half the songs on the album. If you haven’t already, check out Berkeley’s On Fire right away — or maybe catch Cole, Joey, Max and Seb at a show!