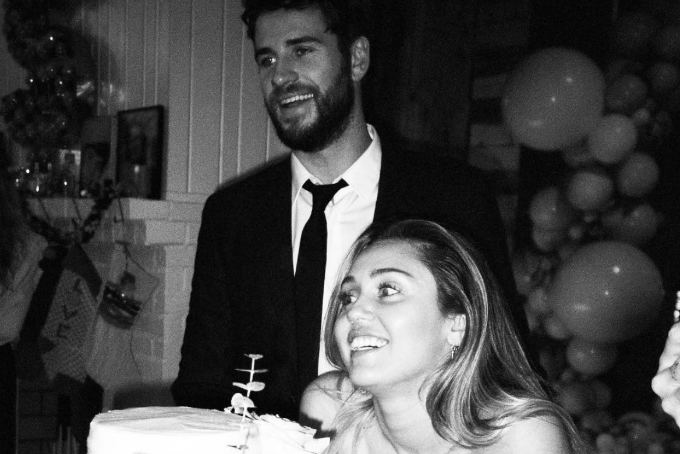 Miley Cyrus is happily married to her longtime friend and co-star of The Last Song, Liam Hemsworth. In a brand new interview with Vanity Fair, Cyrus spoke at length about how her marriage to Hemsworth is “redefining” what it means for a queer person to be in a heterosexual marriage. The 26-year-old “Nothing Breaks Like a Heart” singer is an out and proud pansexual/queer woman; however, she married a straight man. Sometimes the meaning of a queer person’s sexuality gets lost when said person ends up in a heterosexual marriage rather than a queer one. Cyrus aims to change that thinking.

“The reason that people get married sometimes can be old-fashioned,” Miley said. “But I think the reason we got married isn’t old-fashioned — I actually think it’s kind of New Age. We’re redefining, to be f–king frank, what it looks like for someone that’s a queer person like myself to be in a hetero relationship. A big part of my pride and my identity is being a queer person. What I preach is: People fall in love with people, not gender, not looks, not whatever.”

She went on to explain that her relationship with Liam is so deep because they connect spiritually, and that actually, it has almost nothing to do with sex and gender.

“Being someone who takes such pride in individuality and freedom, and being a proud member of the LGBTQ+ community, I’ve been inspired by redefining again what a relationship in this generation looks like,” she told the mag. “Sexuality and gender identity are completely separate from partnership. I wore a dress on my wedding day because I felt like it, I straightened my hair because I felt like it, but that doesn’t make me become some instantly ‘polite hetero lady.’ (PS: Straight women are badass, too.)”

The Younger Now singer-songwriter has been a longtime friend of the LGBTQ community. She started her own non-profit organization called The Happy Hippie Foundation, which aids homeless LGBTQ youth. She brought a homeless youth named Jesse Helt to accept her MTV VMA Award onstage at the 2014 award ceremony. She has been outspoken about her identity as a queer woman for many years and continues to bring awareness to the community, which is one of the reasons why we love her. Thanks for keeping it so real, Miley!