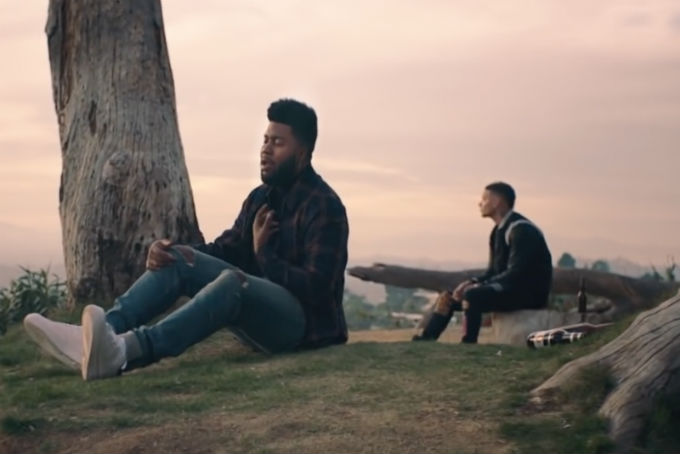 ICYMI, Khalid and Kane Brown recently released their music video for “Saturday Nights,” and it totally makes us want to spend one of our Saturday nights with the two of them. The track was a huge hit off of Khalid’s Suncity EP, which was released last year. Then, when fans found out popular country artist Kane Brown was hopping on the remix, they were super excited.

The video begins with Khalid singing on a hilltop near a cozy fire while sitting on a tree swing and overlooking the breathtaking Los Angeles skyline. He’s then joined by Kane inside a house that just hosted a party, which is clear from the scattered balloons, streamers and liquor bottles seen throughout the video. Each of the performers are set up at their own mic and proceed to put on a very relaxed and laid-back performance. As Kane and Khalid are singing we see the starry night skyline in the window behind them slowly transform into a beautiful pink and orange sunrise. The video then closes out with the R&B artist and country singer sitting upon the hilltop again while taking in the breathtaking view.

Overall, this video portrays what seems to be a very peaceful and relaxed Saturday night, and it does a great job at complementing the calm aura of the song. Personally, we love how simple the video is, while still making us wish we were sitting right there beside them. Khalid and Kane have proven to us that sometimes the perfect Saturday night is after the party ends, when you just get to hang with some friends and enjoy beautiful scenery together.

If you haven’t already, check out the video for “Saturday Nights” down below. Then, be sure to leave a comment or hit us up on Twitter @soundigest to let us know what you think of the stunning visual.