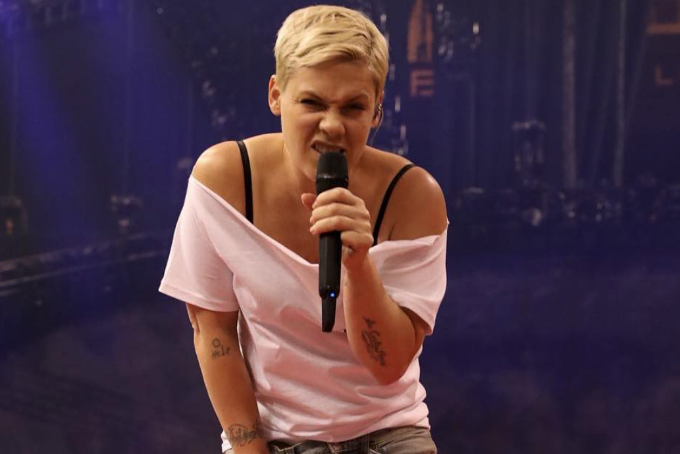 Pink, the queen of theatrics and performance herself, is back at it yet again with a follow up to her 2017 Grammy-nominated album Beautiful Trauma — this time with the enchanting pop track “Walk Me Home.” Released on February 22 with its accompanying neon lyric video, the single is the first from her upcoming eighth studio album Hurts 2B Human, due out in April of this year.

The 20-time Grammy nominee announced the single’s release on The Ellen Degeneres Show earlier this month and shared that she starts filming the music video for “Walk Me Home” soon with The Greatest Showman director, Michael Gracey. Of course, this is totally fitting considering the “So What” singer and her daughter Willow covered their favorite song from the movie, “A Million Dreams,” for The Greatest Showman: Reimagined album. She also teased the album cover for Hurts 2B Human on social media last week to get us all hyped up.

Then, to hype us up even more for her new music, Pink performed a 10-minute medley of her later hits, starting with “Walk Me Home” and bringing in Dan Smith from Bastille to help her out with the duet of her 2012 hit song “Just Give Me A Reason.” You can watch the intensely theatrical medley below.

On top of all this big news for her upcoming album, the entertainer hasn’t stopped since she dropped Beautiful Trauma late 2017, and actually, she’s still touring for the album this year. In fact, you can still catch her on the last leg of the Beautiful Trauma World Tour, which starts on March 1 in Sunrise, Florida and ends in early August in the Netherlands. You can find dates, tickets, and all the latest updates on her tour and the album on her website.

Don’t forget to watch the lyric video for “Walk Me Home” HERE: