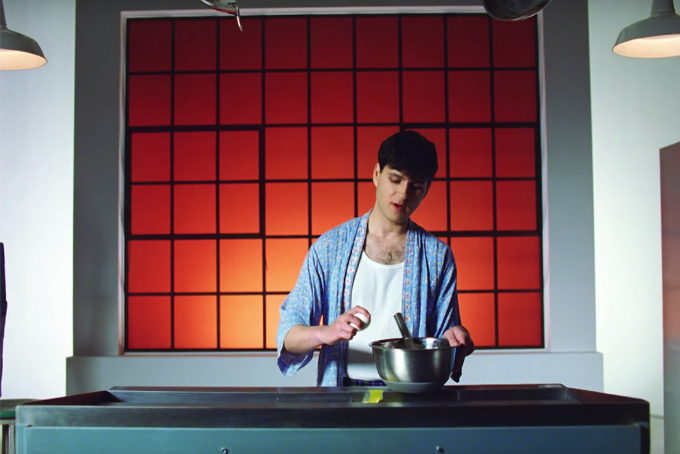 Open on an old strip of film, a cryptic drawing, and the silhouette of Ezra Keonig. The music video for “Harmony Hall” is an oddly nostalgic journey complete with making pancakes and playing guitar surrounded by dripping candles. Considering the upbeat nature of the track, it’s odd to see these jumpy yet soft cuts between band members and a giant green snake slithering around fresh fruit.

The video uses specific imagery from a drawing that flashes on the screen in the beginning. All throughout the visual, viewers can catch frogs and little nuclear-esque symbols pop up. Based on the drawing at the beginning of the video, it looks as if maybe each symbol may correlate to a song, and the little curled up snake goes along with “Harmony Hall,” specifically. Maybe, however, it’s just an aesthetic choice to brand the video nicely.

Harmony Hall, directed by Emmett Malloy. Watch at the link in bio.

The video feels carefree with band members dancing in circles between pancakes. These little scenes slow down the vibe of the video and give it a fun edge. The scenes of the band playing the song surrounded by candles instill this vibe, too. Arguably, the best scene includes a band member sitting with Keonig at the table, staring into the camera and hitting a vibraslap. The vibraslap shows up in several other still throughout the rest of the video.

The video is the first from the new LP, Father of the Bride, due out later this year. “Harmony Hall” and it’s supporting track “2021” are the first new songs to come from Vampire Weekend in six years. Seeing the band back on the small screen is just a glimpse into what is to come, and we can’t wait to hear what else they have planned for us! Check out the snake-filled music video here below, and let us know what you think in the comments section or by tweeting us @soundigest.