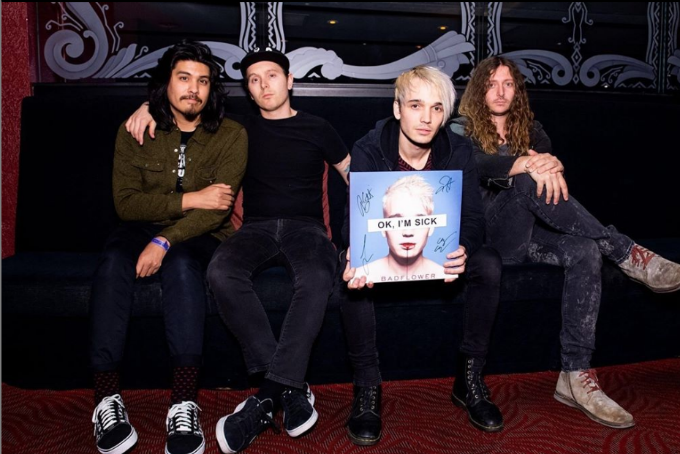 After multiple EPs and singles, we finally have a full Badflower album! Ok, I’m Sick was released by the LA band on January 22, and we can’t get enough of it. Badflower has found a way to combine many genres while bringing something new to the table. With hard rock, grunge, and emo influences, Ok, I’m Sick has something for everone. The album has a darker tone to it, tinged with humor and realism. As far as debut albums go, it is pretty sick (pun intended).

Badflower separates themselves from other modern rock bands with the way they tell stories. Singer Josh Katz’s lyrics provide a vivid and melodic way of sharing life experiences. Although the album seems scatterbrained at times, that gives it more of a human feel. Ok, I’m Sick covers almost every hot topic including mental health, death, sexual assault, and love. Katz also adds a tinge of humor in songs like “Girlfriend.”

Musically, Badflower excels at covering multiple genres. They have heavy hitting riffs in songs such as “Die” and “Ghost.” On the other hand, Badflower provides softer songs with hints of early emo tones. Either way, the band likes to change things up to keep listeners guessing. Switching from soft starts to catchy choruses, Badflower has fun playing with dynamics. Another element of their songs that exemplifies their talent is with adding fun bridges like in “x Ana x.”  Ok, I’m Sick also has songs such as “Promise Me” that throw gut punches right at the end.

Some standouts on the new album include singles “Ghost” and “Promise Me.” “Ghost” addresses a suicide attempt. Although it seems like a bold choice, “Ghost” is powerful in starting important mental health conversations.  On the other end of the spectrum, “Promise Me” is a love song. While heartfelt, “Promise Me” looks at love through the lens of struggling with growing old. Badflower is not afraid to push more boundaries. For example, “Die” is a heated political song that is full of passion. Also, “Daddy” and “Heroine” address toxic relationships in a dark, but most honest way.

From the chaos of “x Ana x” to the swelling instrumentals of the closer, “Cry,” Ok, I’m Sick can turn any music fan into a Badflower fan. Through their storytelling and wild instrumentals, Josh, Joey, Anthony, and Alex have crafted a great debut.  If you have not already, make sure to check out the album in your favorite music format. Even better, Badflower will be joining bands like Nothing More and Shinedown</strong< on tour this year. Hopefully, you can catch the boys bringing all of their album’s energy to life. We have a feeling the future is bright for Badflower.