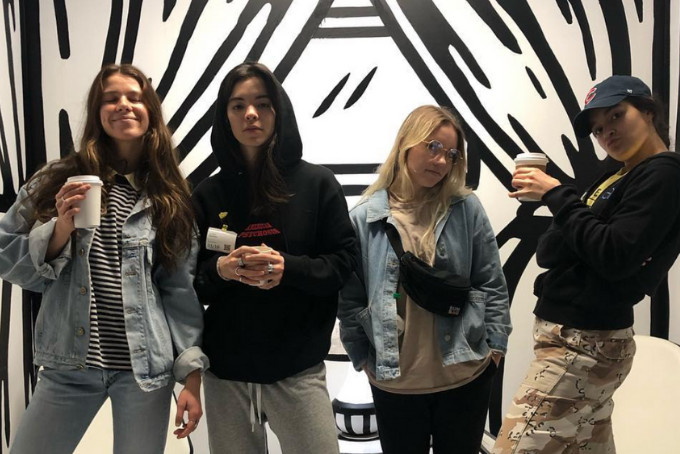 After gaining lots of attention and new fans from touring with 5 Seconds of Summer on their Meet You There Tour last year, The Aces set foot on their own headline tour. The quartet embarked on ao 20-city tour of the US as they partnered with Ones to Watch for their Waiting For You Tour.

Their indie-pop sound made its way to Austin, Texas, where fans were lined up since the early hours of the morning, hoping to get a good spot during the show at the Historic Scoot Inn. Most venues on the tour so far have been super intimate shows, allowing fans to feel even more in tune with the artist!

The Aces also offered meet and greet packages this tour, allowing fans to get to know them a little better with a Q&A session as well as a photo with the band.

quick update WE ARE HAVING THE TIME OF OUR EFFIN LIVVVVESSSS !

Before The Aces hit the stage, their opening act joan, set the tone for the show perfectly. Taking sound inspiration from earlier decades, Alan Thomas on the guitar and Steven Rutherford on the drums gave the crowd nice, chilled out music to engross themselves in before the main act hit the stage.

Opening up with “Put it on the Line,” the band comes out one by one as the fans wait excitedly for all the stage lights to come up. These girlies, or should we say, moguls, definitely know how to work a stage, something that drew our attention to the foursome from the beginning.

Transitioning into a more upbeat track, “Stay,” lead vocalist, Cristal Ramirez, really got the crowd going. She made sure to interact with the crowd as her personality drew in everyone around here. We would almost say she gave us female Harry Styles vibes just by the way she owned the stage throughout the show.

Guitarist Katie Henderson played her heart out with her amazing guitar skills and riffs that the crowd absolutely loved. As the main backup vocals in the band, Henderson and Ramirez emerged by themselves during the first song in the encore for a chilled down rendition of “Hurricane” bringing out the emotions in everyone there.

Bassist McKenna Petty kept rhythm perfectly as she jammed out to the band’s set, looking absolutely flawless and carefree as she made eye contact with fans.

The band’s drummer Alisa Ramirez brought down the house with her high energy drumming that she kept throughout the entire show. It’s amazing to feel the drummer’s energy, especially since they can be pushed to the back of the stage by design, so the fact that Ramirez shined through so hard is definitely unforgettable!

The Aces played a nicely mixed setlist filled with tunes off of their debut album and certain songs off of previous EPs, creating an emotional rollercoaster ride that will have you crying and screaming lyrics simultaneously. The setlist included:

If you have s chance to catch The Aces live during the last leg of their NA headlining tour, don’t second guess yourself—go. Their remaining tour dates can be found below!