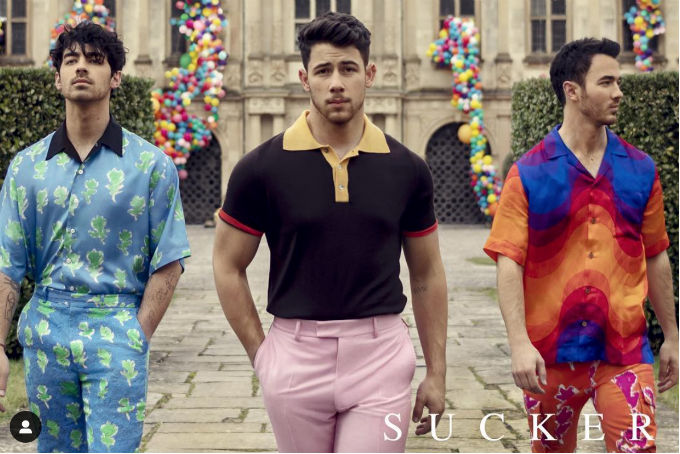 S.O.S. IT HAPPENED. The time is here. Our dreams have officially true. The Jonas Brothers just made their comeback and released their first single in almost six whole years.

The iconic boyband is back and better than ever, although we don’t know if “boyband” would be the right term now that all three — Joe Jonas, Nick Jonas and Kevin Jonas — are all grown up and either married or engaged.

The “Year 3000” heartthrobs released their comeback single “Sucker” along with an iconic music video featuring the most important women in their lives, and it’s honestly everything. The highly anticipated drop premiered at midnight on Friday, March 1, and OG fans took over the internet with panic, excitement and joy. Even Frankie Jonas, the youngest of the Jonas family, took to Instagram to post a video of himself dancing to the new single and claiming to be their #1 fan since birth.

Just for you guys 🎉 pic.twitter.com/IaYohmXMBv

In the song, the brothers collectively portray someone who’s infatuated with another person, describing the great lengths they would go for them. The single has a upbeat pop rhythm to it with light rock vibes throughout, leaving the central focus on the brothers’ vocals and on Nick’s falsetto, in particular.

The band first teased their reunion by reviving the band account on both Twitter and Instagram and posting an image of the single artwork. They also teased the song with a sneak peek from their Carpool Karaoke session on The Late Late Show with James Corden, also announcing a week-long takeover on the late night talkshow.

The music video also premiered on the night of the single release, proving that after six years, the JoBros know exactly what fans want. The music video takes place at a beautiful historic castle in England, featuring Danielle Jonas, Priyanka Chopra and Sophie Turner. So cute!

The beautiful women joined the guys in the video as they wandered around in gorgeous gowns with unique accessories. We were seriously living for it.

The Jonas Brothers coming back is something that none of us were expecting, but of course, we’re definitely not going to complain. Jonas fans will agree that this is the best thing to happen to the fandom in, well, more than six years, after the brothers abruptly split and canceled their tour a mere two days before they were set to hit the road. Yeah, we’re still not over it. Now, they’re making it up to us.

Right now, we’re glad to say this only the beginning of a brand new era for Nick, Joe and Kevin, and the Jonas Brothers are planning on releasing more music soon. In the meantime, though, keep watching the “Sucker” music video on repeat. We know we are!