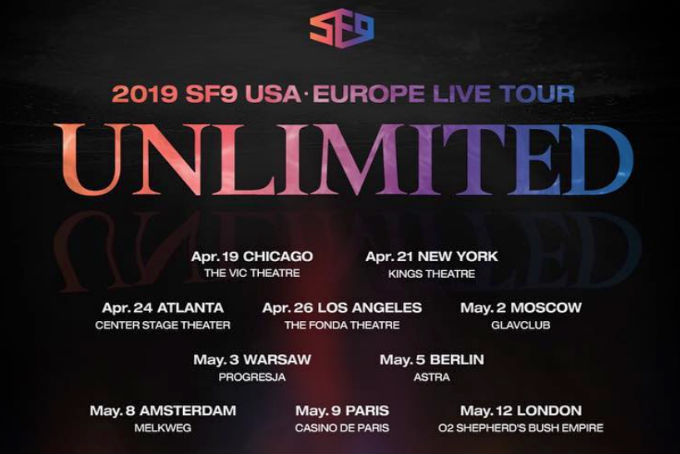 Get ready Fantasies! SF9 is hitting the road! The all-male group will be touring the United States and Europe in the spring.

MyMusicTaste, a crowdfunding concert promotion company, made the announcement on February 27 on their official Twitter. MyMusicTaste helps music fans create campaigns to see their favorite artists in concert and has worked with other K-pop groups including A.C.E. and GFRIEND.

The tour announcement follows the release of the group’s greek mythology inspired 6th mini-album Narcissus on February 20. There are two versions of the album, Emptiness and Temptation. The release of the album was lead by the single “Enough” as well as its accompanying music video. During their comeback showcase, the members said that the focus of the album is to promote self-love.

There are currently 10 dates listed, starting in Chicago, Illinois and ending in London, England. The dates are as follows:

SF9 made their debut on October 5, 2016 under FNC Entertainment. The group consists of members Youngbin, Inseong, Jaeyoon, Dawon, Zuho, Rowoon, Taeyang, Hwiyoung, and Chani. Member Zuho had to sit out of the group’s comeback performances in February due to a back injury. In a statement to Billboard, FNC Entertainment said that they are planning for all nine members to tour.

Tickets will be going on sale on March 13 at 10:00 AM local time. Details for each show can be found on FNC’s Entertainment website under the Notice tab. Also, make sure to check out the tour announcement video below, as well as the music video for “Enough.” Let us know where you’re planning to see SF9!