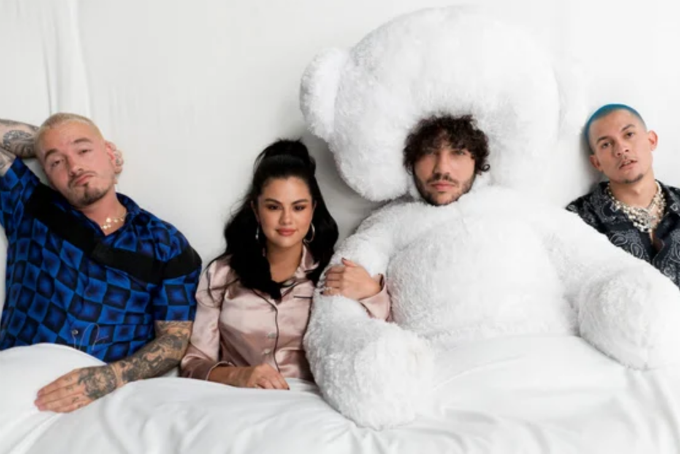 Benny Blanco, Selena Gomez, J Balvin, and Tainy have teamed up on a new collaboration called “I Can’t Get Enough,” and (you guessed it) we can’t get enough of it! The track dropped on Thursday, February 28, if you’re anything like us, you haven’t stopped listening to it since.

Gomez has released her fair share of collaborations in the past few years since her last album release in 2015, including “Taki Taki,” “Wolves,” and “It Ain’t Me”. The 26-year old “Bad Liar” singer has been struggling with health issues, both mental and physical, for the last couple of years following her kidney transplant in the summer of 2017. Despite multiple hospital stays and mental rehabilitation clinics, she has continued to release music. “I Can’t Get Enough” is her first song release of 2019.

Both Benny Blanco and Tainy produced “I Can’t Get Enough,” in which Gomez sings in English while J Balvin brings the Latin flavor to the track with his Spanish verses. The instrumental is a catchy “mmm-mmm-mmm-mmm” looped in the background during the chorus and parts of the verses over an electronic beat. It’s ear candy at its finest.

J Balvin spoke to Entertainment Tonight about the track, praising his experience of working with the songstress, calling her “humble, amazing, and a great person.”

I Can’t Get Enough is out now! Link in bio @itsbennyblanco @tainy @jbalvin

Can’t get enough !! Ya afuera !! Out now!!! @selenagomez @tainy @itsbennyblanco

Tainy made similar comments about working with Gomez to Entertainment Tonight. “She’s a queen,” the producer gushed. “It’s such an honor to have her on my first single. It’s insane. Hopefully, we can continue to do some more work together.”

Speaking to Billboard, Balvin professed his confidence in the track, “This song will be a worldwide hit.”

I CAN’T GET ENOUGH

Tainy told Entertainment Tonight that the track came together “super quick,” and it wasn’t difficult to get Balvin, Blanco and Gomez on board. “It came out super quick and natural, and it was amazing. It’s crazy, and for them to hear it and not even think about it and say, ‘Let’s go. Let’s do it.’ Sometimes it’s a process and they are not feeling it, but this was, as soon as they heard it, they were down.”

“It’s one of those tracks where you just feel it and hear it in the club,” he continued. “It is just going to make people feel good. That is most important.”

“I Can’t Get Enough” is Tainy’s first single as a lead producer. He co-produced the summer 2018 smash, “I Like It” by Cardi B.

Tell us what you think of the track in the comments below. Is it a smash or a dud?