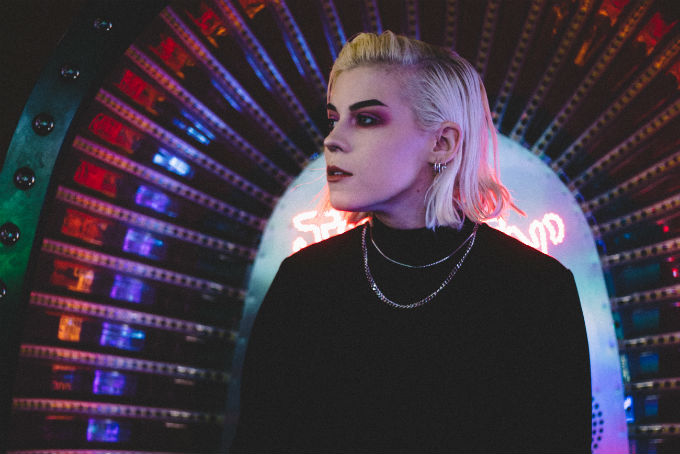 We recently had the opportunity to chat with Car Astor (formerly known as SEE), a self-taught musician and singer-songwriter from Long Island, New York. Her new single, “Don’t Stop, Don’t Speak,” was recently released and more new music is on the way this year. We caught up with the electro-pop singer and discussed her new single and upcoming music, how she feels about being an LGBT musician and more. Check out our interview with her right here.

You recently released your latest single, “Don’t Stop, Don’t Speak” in January. Tell us a little bit about the track and what it means to you.

DSDS was around for a really long time before I was able to write lyrics and melodies to it, so it was kind of this little pain of an instrumental track waiting to be brought to life and one day it just clicked and it eventually turned into one of my favorite songs I’ve ever done. Lyrically it’s about wanting to be with someone when you’re not with them and knowing/hoping they are thinking about you the same way. I feel like I broke a lot of walls for myself with this song and did stuff I wouldn’t have been comfortable with a year or two ago, so it feels good.

Can we expect a music video for “Don’t Stop, Don’t Speak?” If so, can you give us a little scoop about the theme of the video?

Yes!! It’s in the final editing stages right now. I had the most amazing team for this video and they really helped bring my concept to life. It’s a mix of a few different scenes, but it’s heavily stylized and goes back and forth between scenes with me playing in a full band, scenes with me and a girl, and then scenes with a mask and latex!

Your first EP Ties was released back in 2016. How would you say your music has evolved since then?

It’s truly evolved so much — I feel like a completely different person honestly. Back with ‘Ties’ I was very torn about who I was and who I wanted to be and now I feel like I’ve figured that out (a bit) more. I think on ‘Ties’ I was very reserved vocally and production-wise, and lyrically wasn’t as honest and upfront as I’ll be with all of the new material. I gained a lot of confidence through the years after recording ‘Ties’ and now feel able to do the things I always wanted to do in my head. I think the new material is just a huge step forward in my eyes!

We know you have a new EP in the works. Any idea on when it’s going to be released and what we can expect to hear on it?

I honestly don’t know how exactly I’ll be releasing the new material, but I do know what the songs are. I have a ballad that is very special to me called “Spaces,” which I’m very excited to release, and then I have some dark fun songs, more rock ones, fun lighter ones, sad ones — it’s tough to describe! My main goal is to hit all of the emotions I feel as a person. Don’t want to leave anything untouched and I’m happy to say that I’ve been achieving that to the best of my ability.

When you’re not on the road or in the studio, what do you like to do to unwind? Do you have any interesting hobbies?

For better or worse I literally do music-related things 24/7. I produce for other artists on the side as well so it’s constantly in my life. I guess my favorite outside thing to do would be cooking. I come from a family of amazing cooks and it’s a really creative process in its own way and I love eating.

Describe your music creation process. Do you typically write lyrics or a melody first, or does it vary by song?

How would you say that your identity as an LGBT pop singer has helped elevate your music?

I think young people crave LGBT musicians because only recently has it really been acceptable to people to be openly out in the music industry and have viable careers — especially for new artists. It has also made me able to be very honest in digging deep and learning to be open to my feelings and my experience, as I had to practice that initially with coming out and finding and accepting who I was.

If you could describe your music to someone who hadn’t heard of you before in a way that would pique their interest, what would you say?

If you combined The Matrix with Atomic Blonde and sprinkled in some of The Cranberries, Alanis Morissette and Avril Lavigne, that would be me.

Coming soon!!! I have some low-key stripped down shows on their way, but stay peeled for the full band shows because I’m working on them and they will be very exciting for me.