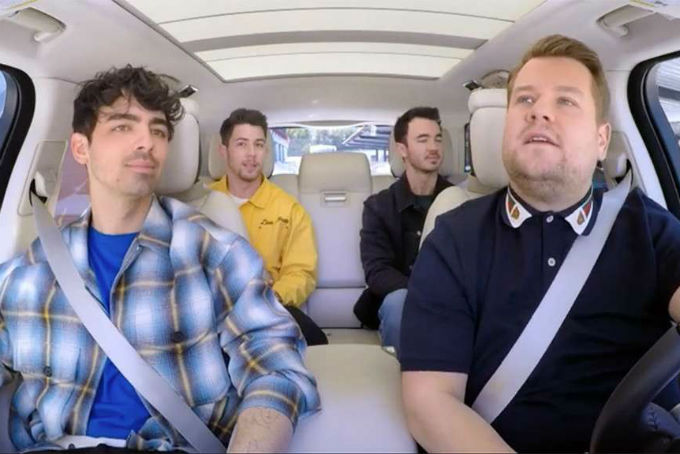 We’re still reeling from the fact that the Jonas Brothers are back together. To celebrate their reunion, Nick, Joe and Kevin Jonas spent every night last week (March 4-7) as guests on The Late Late Show With James Corden (the show dubbed it Late Late Jonas in their honor). On Thursday, March 7, which marked their final appearance on the show for the week, the boys did the famous Carpool Karaoke skit with James.

Unsurprisingly, this episode of Carpool Karaoke involved some classic JoBros hits as well as a performance of their new single “Sucker.” Much to our surprise, though, it also featured a lie detector test, which revealed some pretty ~interesting~ things about the brothers.

Some of the highlights include Corden asking Nick if he, at one point during his many weddings to new wife Priyanka Chopra-Jonas, thought to himself, “I’m done with these weddings.” Nick answered with a laugh and a poignant, “Yes… it was when I looked at the bill!” and the lie detector confirmed he was telling the truth.

Kevin was asked how many times he thought about punching Nick for breaking up the band. He answered, “None,” which the lie detector determined was an outright lie. He was also asked if at any point during Nick’s weddings he thought to himself, “How much longer is this going to be?” and Kevin answered “Yes,” which turned out to be completely true.

Things then got even more awkward when Nick was asked if he thinks he’s a better singer than his brothers. He responded that he doesn’t believe that to be true, and after a bit of delay, the lie detector test hilariously confirmed he was lying. Nick also admitted that he was the one who broke up the band in 2013, but redeemed himself by also being the one to get the band back together.

The brothers took the lie detector test answers in stride and lots of laughter ensued. You can check out the full Carpool Karaoke video HERE: