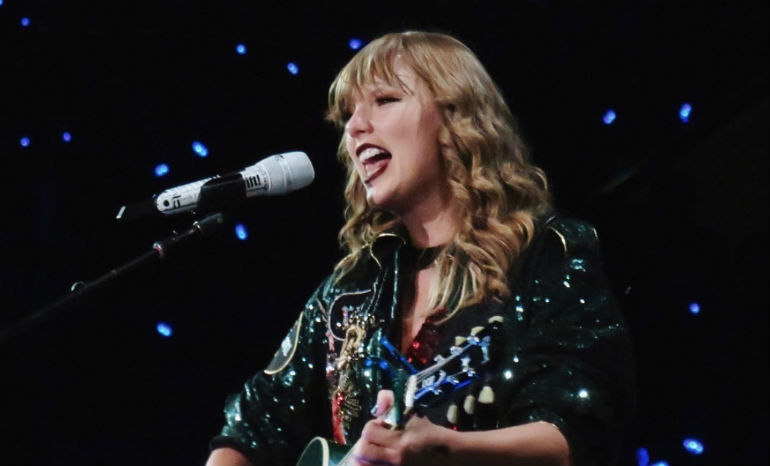 Superstar Taylor Swift has taken a small break from the spotlight after her Reputation Stadium Tour, which took her around the world. Her Reputation album took a different direction than her previous releases — she dipped into a dark-pop genre and steered away from the usual break-up anthem she became known for. She even addressed the notorious feud between her, Kim Kardashian and Kanye West. It had extreme Twitter stans labeling her a “snake,” and we’ll never forget Kendall Jenner tweeting snake emojis galore in retaliation. It caused a ruckus on social media for a whole week, probably setting a record for being the most buzzed about topic on Twitter.

The 29-year-old shielded herself from the public eye, but now there are rumblings about possible new music on the horizon. Recently, she graced the cover of ELLE magazine and shared all the important lessons she learned before her 30th birthday. It allowed us a closer look into the pop star’s brain and what she’s been through — especially in the past few years.

She’s disabled comments from her Instagram to help her self-esteem.

The soon-to-be thirty-year-old revealed why she turned off the comments from her Instagram posts, and it’s because she finds it helps boost her self-confidence without the nagging feeling of trying to win the approval of others.

“I’m showing my friends and fans updates on my life, but I’m training my brain to not need the validation of someone telling me that I look. I’m also blocking out anyone who might feel the need to tell me to ‘go die in a hole ho’ while I’m having my coffee at nine in the morning,” says Swift.

She learned to love her body.

“I worked hard to retrain my brain that a little extra weight means curves, shinier hair, and more energy,” reveals Swift. She ultimately learned to embrace a curvier body and that extreme dieting isn’t always the healthiest route.

She learned that aging isn’t something to be ashamed of.

With her 30’s quickly approaching, Taylor addressed the problematic view on women getting older. She shared how she was inspired by actress/activist Jameela Jamil‘s words regarding the subject.

“Reading her words feels like hearing a voice of reason amongst all these loud messages out there telling women we’re supposed to defy gravity, time, and everything natural in order to achieve this bizarre goal of everlasting youth that isn’t even remotely required of men,” the star passionately wrote.

She revealed her biggest fear was touring after the Manchester Bombing.

Following the Manchester Bombing at Ariana Grande‘s Dangerous Woman Tour where 22 fans lost their lives, Swift shared that she was scared to go forward with her trek across the globe. There were extreme lengths she went through to ensure her safety as well as her fans’.

“There was a tremendous amount of planning, expense, and effort put into keeping my fans safe. My fear of violence has continued into my personal life,” she said. “I carry QuikClot army grade bandage dressing, which is for gunshot or stab wounds. Websites and tabloids have taken it upon themselves to post every home address I’ve ever had online. Every day I try to remind myself of the good in the world, the love I’ve witnessed and the faith I have in humanity. We have to live bravely in order to truly feel alive, and that means not being ruled by our greatest fears.”

In any case of sexual assault, she always believes the victim.

After her highly publicized sexual assault case almost two years ago, Swift knows firsthand the repercussions of being a victim. Her adamancy on being on the victim’s side comes from a place of compassion: “I believe victims because I know firsthand about the shame and stigma that comes with raising your hand and saying ‘This happened to me.’ It’s something no one would choose for themselves. We speak up because we have to, and out of fear that it could happen to someone else if we don’t.”

She embraces her insecurities without trying to seek validation.

We all remember the time of T-Swizzle’s infamous #SquadGoals. It consisted of supermodel besties and dreamy getaway vacation Instagram photos. But it’s been a while since we’ve seen her flaunt these highly publicized friendships. Now she reveals how her past childhood traumas of being bullied caused her to make up for what she felt was lacking in her past.

“In my twenties I found myself surrounded by girls who wanted to be my friend,” the “Delicate” singer said. “So I shouted it from the rooftops, posted pictures, and celebrated my newfound acceptance into a sisterhood, without realizing that other people might still feel the way I did when I felt so alone. It’s important to address our long-standing issues before we turn into the living embodiment of them.”

Her mother is battling cancer again.

Back in 2015, the artist revealed in a Tumblr post that her mother Andrea had been diagnosed with breast cancer. She fought it bravely, but now her cancer has unfortunately returned. Swift got personal with this one, acknowledging that there’s nothing more important than our loved ones.

She said, “It’s taught me that there are real problems and then there’s everything else. My mom’s cancer is a real problem. I used to be so anxious about daily ups and downs. I give all of my worry, stress, and prayers to real problems now.”

She also revealed that her father battled cancer at one point as well, but it sounds like he’s doing better.

She’s learned to laugh at the haters.

The “Look What You Made Me Do” singer” got candid about the very public fight between her and the Kardashian clan. Loyal followers of the reality family launched a whole campaign, which labeled the “Getaway Car” singer every mean name in the book. While she says it brought her to the lowest point in her life, she still found a way to laugh about it.

“I can’t tell you how hard I had to keep from laughing every time my 63-foot inflatable cobra named Karyn appeared onstage in front of 60,000 screaming fans,” she recalled. “It’s the Stadium Tour equivalent of responding to a troll’s hateful Instagram comment with ‘lol.'”

Before this past year, the pop star had been noticeably silent on political issues. It caused fans and listeners to question her ethics when she was asked to make a statement. But after her moving Instagram post regarding her political views, it caused a major shift in celebrities voicing their opinion. She vowed to do more before upcoming election — especially with the massive platform she has.

“Only as someone approaching 30 did I feel informed enough to speak about it to my 114 million followers,” said the Grammy winner. “Invoking racism and provoking fear through thinly veiled messaging is not what I want from our leaders, and I realized that it actually is my responsibility to use my influence against that disgusting rhetoric.”

She’s learning to forgive herself.

Growing up in the spotlight, Swift has had to deal with many insults hurled her way. But perhaps her harshest critic has always been herself. The international pop star learned to move on from simple mistakes and grow from them, saying, “I’ve come to a realization that I need to be able to forgive myself for making the wrong choice, trusting the wrong person, or figuratively falling on my face in front of everyone. Step into the daylight and let it go.”