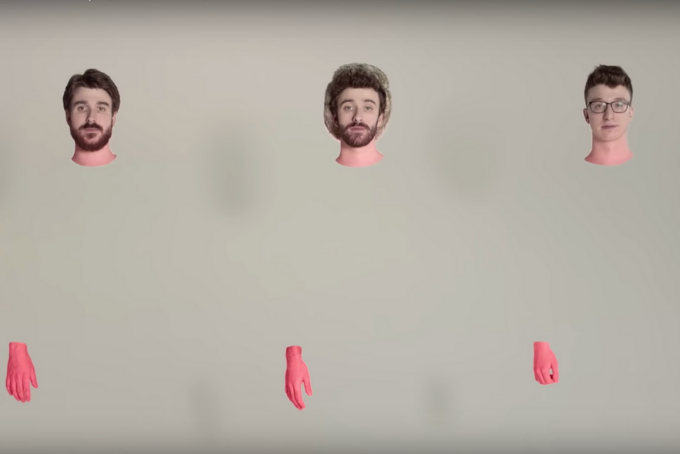 Indie-pop band AJR released their newest music video “100 Bad Days,” and it is trippy. If you’re familiar with the New York-based brothers, you’ll know their style of music is innovative and unique. The music video for “100 Bad Days” is a visual treat that keeps you on your toes, trying to guess what will to come next with each frame.

The video starts with disembodied hands that artfully reveal lead singer Jack‘s face in an eerie jack o’lantern pattern devoid of eyes and a mouth. The video might seem disturbing at first because the imagery is so abstract, but the images are choreographed so perfectly in sync with the audio—it’s quite magical. The music video is almost like watching EDM visuals on the big screen at a concert. “100 Bad Days” is artfully done with a bit of unnerving weirdness thrown in.

The song itself has a modern moral that examines how people take their bad experiences and use them as entertainment to impress strangers. It questions our motivations for why we perform for new people. Is it to make them think that we’re more interesting than we are? Maybe it is a more cathartic impulse to commiserate our past “bad days” with others. Regardless, with the current social media culture that has been cultivated over the past decade, the pressure to show off to others is very much unavoidable.

A common theme throughout AJR’s overall music is questioning and exploring the trivialities of the modern millennial and Gen Zer rather than endless love songs, which are the bread and butter of pop music. Their last album, The Click, has a song called “Netflix Trip” that discusses remembering all the stages of adolescence that happened over the course of “The Office” seasons airing. Does it get more millennial than that? We don’t think so.

The “100 Bad Days” release is just a few weeks before the band’s third album Neotheater is set to release. Neotheater seems to be the band’s most epic album yet. Alex, Jack, and Ryan Met have hit some mainstream success with their songs “I’m Ready,” “Weak,” and “Sober,” for their DIY style of composing. Each brother contributes to their sound in their own special way, which is what truly makes them a one-of-a-kind band. Their sound is such a mix of many different styles, and no one can quite do what they do.

Check out “100 Bad Days” and let us know what you think in the comments below or tweet us @Soundigest!