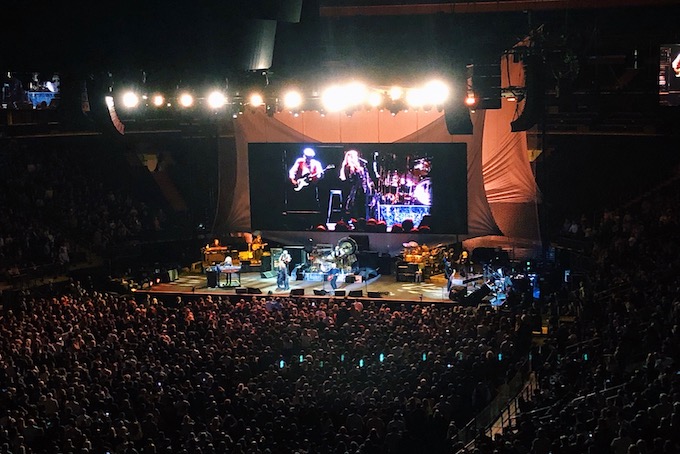 Fleetwood Mac‘s “An Evening With Fleetwood Mac” Tour made its first stop in NYC on Monday, March 11, selling out Madison Square Garden for the first time since 2015.

The band currently consists of Mick Fleetwood, John McVie, Christine McVie, Stevie Nicks, Crowded House’s Neil Finn, and Tom Petty and The Heartbreakers‘ guitarist Mike Campbell. Former member Lindsey Buckingham was ousted from the lineup prior to the start of the tour in late 2018 and has since been tangled up in a series of lawsuits with his former bandmates.

Though it’s hard to imagine Fleetwood Mac without Buckingham, Finn and Campbell proved more than fit to fill his shoes.

There was no opening act for the show. Shortly after 8:00 p.m., Fleetwood Mac took the stage, opening with “The Chain,” followed by “Little Lies” and “Dreams.” The setlist also included favorites from the 1977 Rumors album, including “Second Hand News,” “You Make Loving Fun,” and “Gold Dust Woman.” Along with her enchanting hits like “Gypsy” and “Rhiannon,” Stevie Nicks also sang “Black Magic Woman,” which original member Peter Green wrote for the band before Santana made it a hit.

Each member of the legendary group had their moment to shine. Mick Fleetwood had the crowd on their feet during his drum solo in the middle of “World Turning,” and Stevie Nicks had the crowd in tears while she performed “Landslide” alongside Neil Finn.

The band closed the two-hour set with “Go Your Own Way,” returning to the stage shortly thereafter for a touching Tom Petty Tribute. Fleetwood Mac played “Free Fallin'” as photos of Tom Petty flashed in the background, including many photos of the two bands together throughout the years.

The crowd had fans of all ages, and everyone was on their feet cheering, singing, and dancing the whole night.

Around 10:30 p.m., Fleetwood Mac closed the encore with “Don’t Stop” and “All Over Again,” before leaving the stage for good. We wish we could live the night all over again!

Thankfully, the band will be back at the Garden on Monday, March 18. Grab a ticket while you can! It’s a not-to-miss event.