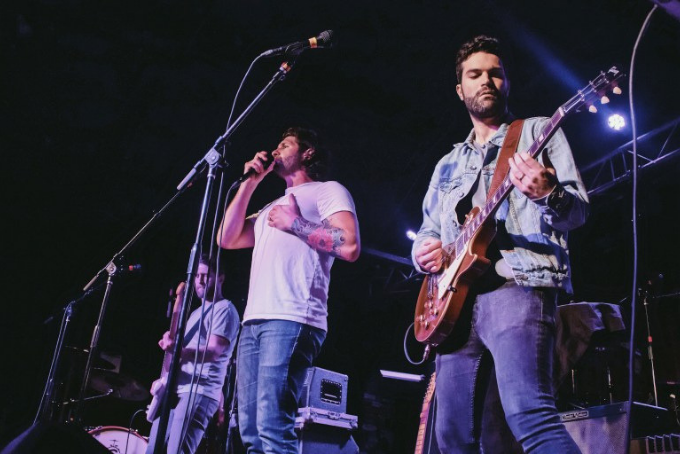 “Take your shirt off,” yelled a teenage girl and her giggling friends standing next to me after Bel Heir finished their last song. Embarrassed and realizing everybody in her vicinity had heard the blunt comment, she followed up with, “Sorry…you guys were just insanely good.” No need for an apology, I’m pretty sure the rest of Brighton Music Hall felt the same way. While the majority of the audience was there to see Smallpools, they were one hundred percent converted into Bel Heir fans following their set.

The Philadelphia-based trio played to a sold-out Boston crowd on Monday night. Looking around the venue, nobody stood still. Throughout their entire eight-song set, heads bobbed up and down and hands shot up in every corner. My favorite thing about seeing an up-and-coming band live is watching the audience’s faces as they light up with the thought that they just might have found their new favorite artist.

The evident bond of brothers Patrick and Paul Mencel and friend Ian Walsh up on stage transformed the already intimate atmosphere into a much closer party. Bel Heir began the night with “Hey,” the newest single from their 2019 EP Don’t Turn This Record Down.

Fitting title. Why would you want to turn it down? The too-short set left me and everyone else wanting more.

that characterize their pop-gone-rock roots. “Lemon Pie” gave the room an early 2000s punk vibe, and the audience enjoyed singing along to the catchy “oh oh oh, ah ah ah” riff. Bel Heir’s sound is weighted in loud guitar parts but at the same time gives off a summer feeling. They performed “Sunny Days,” from their 2017 EP Washed Up, which is about a love interest that reminds them of brighter weather, creating a sense of summer. Everyone in the room could feel the positive energy, which prompted Paul to ask, “Y’all mind if I take a picture and show Instagram how beautiful Boston is?” He snapped away as the audience held their arms above their heads in awe.

“We’re gonna get a little dark for a second. This next song is called ‘Bad Intentions’ about the wrong person,” frontman Patrick Mencel told us. At the sound of the first note, Nirvana’s “Heart Shaped Box,” popped into my mind and I watched the three musicians alter the venue into a grungy basement. Patrick asked fans if anyone remembered a band called Sugarcult because the next song, “Graduation” was written with the group’s lead singer Tim Pagnotta. It’s a track the college student-heavy audience could relate to. The set ended with a feeling of belonging as the crowd sang the chorus with arms wrapped around each other. “Do you remember how we used to be? // We were punk ass kids // We were lovesick beasts // We were nature freaks // Do you remember how we used to be?” Happiness was clearly in the “heir.”

Listen to their latest EP below, and don’t forget to let us know what you think. Leave a comment below or tweet us @soundigest.