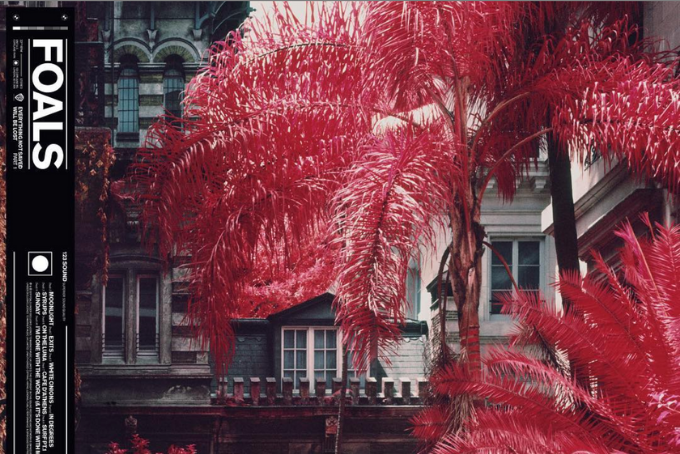 Let’s face it. The world is a bit of a mess right now. With ongoing political issues, climate change, and humanitarian crises around the globe, it’s hard not to bang your head against the wall in frustration. Artists have taken note, writing anger-filled resistance songs meant to inspire the public to make a change. Oxford band, Foals, however, has decided to take a different approach.

In January, Foals announced that they would be releasing not one, but two new albums in 2019. Everything Not Saved Will Be Lost Part 1 was released on March 8. Part two is expected in the fall. The albums mark the first release from the group since their 2015s record, What Went Down, and the departure of bassist Walter Gervers in 2018. In an interview with Fader, frontman Yannis Philippakis said that Gervers’ departure actually made their roles more “fluid” as they each had to pick up more parts. As a result, the group decided that they wanted to take a different approach this time around.

Everything Not Saved Will Be Lost
Part 1
Part 2
2019 pic.twitter.com/5Twuk8tSDP

Despite the differences between this release and previous projects from Foals, you can still tell Everything Not Saved… is a Foals record. The band’s signature fullness and catchy choruses show that they know what they’re good at while not being afraid to try something new.

The album opens with the ambient track “Moonlight,” which serves as a nice taste of what is to come. Right away, Foals establishes the apocalypse imagery with the of a figure on a black horse, possibly referencing the Four Horsemen of the Apocalypse. The end of the world is the major theme of this record, backed by disco and 80s synth pop-inspired tracks. Given the current condition of the world, it’s no surprise the album references hot button issues throughout each song.

The second track, “Exits,” does an excellent job of creating a feeling of confusion over a groovy bass line. Philippakis sings of underground bunkers and seeking clarity while the instrumentals create a dreamy and airy feel, making the listener unsure of whether they should dance or be scared.

The track “In Degrees” really showcases the disco inspiration. It can be seen as a critique of the social media age, as the world is more connected than ever before—but at the cost of meaningful relationships. If there is one thing that Foals accomplish on this album, it’s creating societal criticism and making listeners want to dance to it. “In Degrees” is the best example of this with its infectious groove.

“On The Luna” is the first track in which explicit political commentary is made. The song features the lines “Trump clogging up my computer // But I’m watching all day, all day.” This sums up the current state of American politics; Trump says something outrageous and offensive and public outrage follows. While the reference to American politics is explicit, the argument can be made that the band is also taking a shot at the U.K. government over Brexit. Again, the serious subject is lead by upbeat and poppy instrumentals. With the addition of cowbell and Philippakis’ more airy delivery, it’s hard not to catch yourself moving and singing along.

The album wraps up with two more melancholic, yet peaceful tracks. “Sunday” takes the themes of the album and provides a message of contentment with the end of the world. Lyrics like “Cities burn, we don’t give a damn // ‘Cause we got all our friends right here,” reflect a disenchantment with the world left to the next generation by the current one. It comes across as acceptance that the world is in disarray and that there is nothing left. The song almost contradicts this feeling in the bridge, suddenly changing to a frantic build up, before returning to its previous full and thematic sound. It is the final release before the collapse.

Concrete jungle where dreams are maaaade of 🗽 @spotify

The final track, “I’m Done With The World (& It’s Done With Me),” takes a notable turn from the dance and synth-infused tunes before it. Philippakis sings of escape over a piano-led ballad. The track has a finality to it with lyrics about disconnecting from the world. The delivery and ambiance of the track contribute as well. Similar to the opening track, the ambient synths pull the listener in.

Everything Not Saved… makes the current chaos of the world seem bearable. Catching the subtle meanings behind the lyrics can be tricky. It took us quite a few listens before we felt we understood. Philippakis’ voice contributes to this, as his rich and hazy tone can almost distract you from what he’s actually saying. While the arrangements of the track are unique and well executed, it almost seems that there was more focus on sound experimentation than lyrical meaning. Despite this, the arrangements are catchy and unique enough that they stick in your head long after the album concludes, thus making you think about the words more.

Foals have reached a new chapter in their career with this release, and who knows, with songs like these, maybe we, too, can make our way through the chaos.