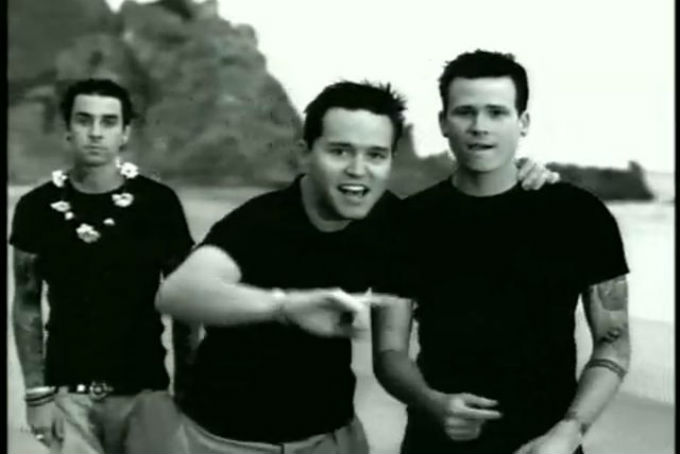 Without Blink-182, we’d all be living in a very different world.

Yes, it does seem ridiculous to paint up an It’s a Wonderful Life situation about the band that has an album titled Take Off Your Pants and Jacket, but nevertheless, they are actually pretty important.

If there was ever a summer that you had tickets to Warped Tour, you wouldn’t debate that last statement. For pop-punk kids, Blink-182 is one of the seminal, holy acts, right up there with Green Day and the Descendents.

But if you’re not, Blink-182 is probably not a band you hold in high regard. At best, they represent a time where Blockbuster was still around and frosted tips were considered fashionable. At worst, they were that naked band that was going to, in no uncertain terms, lead to the decline of western civilization

However, the reality of the band is a little more boring and honestly, quite historical.

(Yes, you read that correctly, we did just say that about Blink-182.)

The band is often credited with popularizing pop-punk, especially the kind that MTV picked up on in the mid-to-late 90s and early 2000s. In fact, one might argue that their third album Enema of the State is actually what caused MTV to pick up on the genre in the first place.

Their boy band parodying in the music video for “All the Small Things” is really what made executives and critics sit up and take note—because this so-called punk band actually did look like a boy band, but beyond that, they were smart enough to be self-aware. And while a lot of “real” punks scoffed at what they thought of as “posers,” Blink-182 was on their way to becoming iconic.

Of course, Blink-182 wasn’t the only band to help popularize pop-punk. But the other bands that rode in on that cultural wave (think American Hi-Fi, or Nine Days—if those names even mean anything to you) fizzled out as soon as Hot Topic started selling neon skinny jeans and “crunkcore” became a thing.

There are a lot of reasons that Blink-182, of all bands, was the one that made it. But their perfect combination of juvenile humor, easy-to-sing-along singles, highly re-watchable (and funny) music videos and surprisingly squeaky-clean image (for a punk band, anyways) are what made them the delegates for a whole generation of suburban rebels.

And those rebels would grow up and go on to make their own bands, many of them citing Blink-182 as a main influence.

Truly, the list of bands and musicians that claim to be influenced by Blink-182 is both eclectic and anthemic. From the obvious, like All Time Low and Panic! at the Disco (both bands literally started as Blink-182 cover bands), to the unexpected, like Mumford and Sons and The Chainsmokers, you’d be hard pressed these days to find a band that hasn’t, in some way, been shaped by the San Diego trio.

Beyond that, the members of Blink-182 have become cultural phenomenons in their own right—the unmistakable “badge of honor” logo from drummer Travis Barker‘s clothing brand, Famous Stars and Straps, has graced the hallway of every high school campus imaginable, and then some. Plus, Barker has made himself just as much a staple in hip-hop as he is in pop-punk by frequently collaborating with artists like Steve Aoki and Yelawolf.

Bassist (and only original Blink-182 member left standing) Mark Hoppus has made endless appearances on TV shows and movies and is often tapped to lend his eloquence and wisdom to different documentaries, ranging from Filmage: The Story of Descendents/All, a documentary about the legendary pop-punk band, to The Other F Word, a documentary about fatherhood.

Oh, and while he’s no longer a member of Blink-182, we can’t forget Tom Delonge, who is doing pretty OK himself—he just landed a show on the History Channel about aliens. (What else would you expect?)

For almost 30 years, Blink-182 has not only been influencing pop-punk, but culture overall. But for everything they’ve done, we can’t help but think that what would make them most proud is by being remembered as “that band that ran around naked.”

Talk about “on brand.”