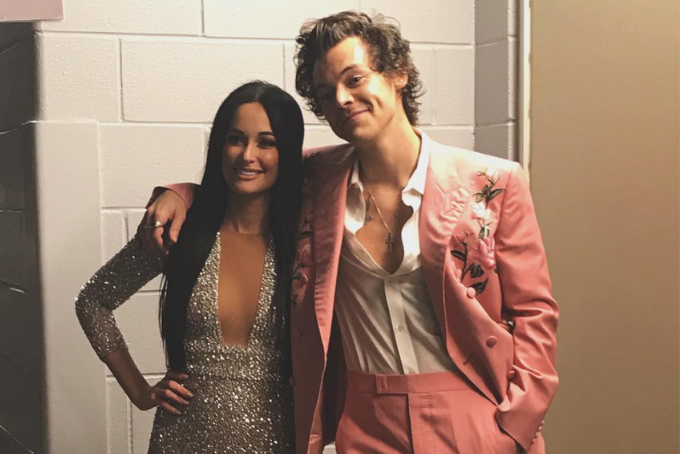 Stars like Taylor Swift, Halsey, Cardi B and Alicia Keys swarmed the iHeartRadio Awards last week, making it the place to be. With mind-blowing performances and monumental wins, it was most definitely a night to remember for some artists. One notable award that had fans diligently voting until the very end was Best Cover Song. With a wide range of game-changing covers like Ariana Grande‘s rendition of Aretha Franklin‘s “Natural Woman,” and Shawn Mendes and Teddy Geiger‘s collab on Queen‘s “Under Pressure,” only one could crush the competition.

Kacey Musgraves and Harry Styles delivered an iconic performance of Shania Twain‘s “You’re Still the One” during Styles’ world tour, where Musgraves held a coveted spot as his opening act for the U.S. leg of his trek across the world. It made for a memorable night at New York City’s Madison Square Garden and now it holds the crown as the Best Cover Song among iHeartRadio fans. Needless to say, both Musgraves’ and Styles’ fans were pretty excited.

The former One Direction member accepted the award via Twitter as he adorably received a fresh manicure.

Naturally, dedicated fans of the singer flocked to Twitter, posting their enthusiasm reactions over the duo’s win. In typical Styles fans fashion, the tweets were witty as usual.

Harry really said fuck toxic masculinity when he accepted his best song cover on iheart awards while getting his nails done 💅 🤩😍 pic.twitter.com/aQzWlTU4hG

Others were just genuinely happy for them.

Some are even still waiting on the duo to release the studio version of the tune. (We’re keeping our fingers crossed as well)

I’m just waiting here until Kacey & Harry both release the studio version of Still The One like they both said they would if they won the iheart award… where is it !

Last, there were those you still can’t believe Harry Styles even exists—it’s OK, sometimes we can’t either.

thinking about how harry is really out there breathing and existing and just being harry https://t.co/sLFOTKinXm

Overall, a loyal fanbase is the strongest thing an artist can hope to have on their side. Especially with a Grammy-award winning musician and worldwide boy-bander’s star power, there’s no way they can be defeated.

Let us know your thoughts on iHeartRadio’s award for “Best Cover Song” and your favorite moments from the award show by tweeting us @soundigest!