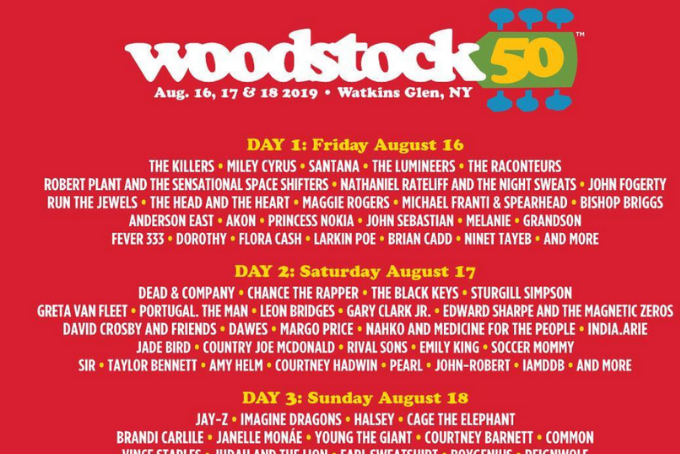 The wait is over for flower children everywhere. After months of rumors, the initial lineup for 50th anniversary Woodstock festival has been released. On Tuesday night, the Woodstock 50 website and social media pages dropped the big news. On August 16, 17 and 18, New York’s Watkins Glen will host many of today’s biggest acts in music.

Names such as The Killers, Miley Cyrus, the Black Keys, Chance the Rapper, Imagine Dragons andJay Z grace the nostalgic-looking lineup poster. Even a few artists from the original festival will be performing like Robert Plant, John Fogerty,Santana, David Crosby, and The Zombies. Sticking with its original theme of “Peace, Love and Music,” the festival is partnering with community organizations and nonprofits, including HeadCount, March for Our Lives and Hiring America.

For those who are eager to return to the summer of ‘69, tickets will be available for the event on April 22, which falls on Earth Day (how fitting). The original Woodstock organizer, Michael Lang, had previously hinted that, “It’ll be an eclectic bill. It’ll be hip-hop and rock and some pop and some of the legacy bands from the original festival…I want it to be multi-generational. Woodstock ’94 was a nice mix of young and old and that’s kind of what we’re going for here.” Well, looks like he was correct and definitely did not let us down. A few more legacy acts would have been nice to see, but this lineup makes a statement.

Keep an eye out for more information on tickets, and read through the full lineup below.