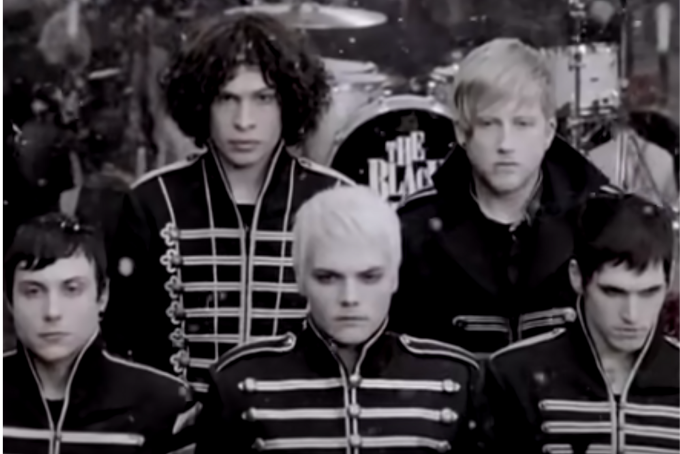 To say that a band has an “origin story” is awfully dramatic, but My Chemical Romance always had a flair for the dramatics.

It’s September 11, 2001. Gerard Way is an intern at the Cartoon Network, riding a train into New York City. He’s on his way to attend a pre-meeting to pitch his show The Breakfast Monkey, when, quote, “the worst thing in the world happens.”

Despite attending the School of Visual Arts (or SVA for short) and getting a Bachelor of Fine Arts, Way had always had aspirations of being in a huge, theatrical rock band. His first bands never quite panned out (in the way that first bands never do), and he turned to his love of drawing and comic books to help him find a more realistic career.

Any My Chemical Romance fan worth their weight in eyeliner knows the rest of the story by heart. Way witnesses the Twin Towers falling, realizes that life is fragile and that he can’t put his rockstar dreams on hold anymore. That day he goes home to write “Skylines and Turnstiles,” AKA the very first My Chemical Romance song ever. He calls up his brother and some friends, and they make a band. With a little hard work and impeccable timing, they become one of the biggest bands to ever come out of the second wave of “emo” music.

My Chemical Romance is one of those bands that is hard to admit you like. Their flair for the (over) dramatics made them an easy target for music snobs, and their somewhat macabre imagery (inspired by the entire band’s love for horror movies) made them an even easier target for moral guardians. If they weren’t being blamed for the demise of rock music as a whole (because it is very uncool to try or to care), they were being blamed for the suicides of teenagers.

The My Chemical Romance legacy is one of constant turmoil, which is very fitting for a band that was literally born out of the ashes of tragedy. If they weren’t struggling with personal demons (the early years of the band were wrought with the Way brothers’ issues with addiction and mental illness), they were struggling with life in the public eye.

A band of misfits, they were never content to do what they were told. Every album was a rebellion in some way to them—The Black Parade was the goth-rock-opera concept album that was meant to be a big “take that!” to an audience who only thought they were capable of the “screaming and crying” of Three Cheers for Sweet Revenge, and Danger Days: The True Lives of the Fabulous Killjoys was a response to people who thought they were only capable of heavy, dreary, sadness, and in a way, also a response to their newfound mega-stardom.

As Gerard Way once said, the album was his response to “really hating famous people.” But you can only rebel so many times, can only do the unexpected so much before your “unexpected” becomes… expected.

On March 22, 2013, after four full-length studio albums and 8,500,000 records sold, My Chemical Romance finally pulled the plug. And while it was heartbreaking for many, it was ultimately unsurprising. A band that thrived on being defiant and (almost embarrassingly) emotional, a band that was driven by consistent tumult and turmoil, was not meant to last. It couldn’t.

But God, was it incredible while it lasted.

Truthfully, the last six years in music have been kind of boring without a band like My Chemical Romance. A band that was willing to be over-dramatic, over-theatrical, and most importantly earnest. This band genuinely believed that they could (and would) save your life. And in many cases, they weren’t wrong.

Though many have tried, the torch of My Chemical Romance has yet to truly be passed on. Sure, there are many bands who carry on the legacy in some way or another—Twenty One Pilots has an emotional vulnerability that has lead to more than a few comparisons, and “art-fashion-rock” newcomers Palaye Royale do boast a certain theatricality that would put you in mind of their New Jersey predecessors.

But ever since that fateful day in March, nobody has really mastered that perfect combination of self-righteousness and flamboyance that was at the heart of My Chemical Romance’s success. The willingness to put their hearts out on their sleeves, the hero complex, the taking-themselves-way-too-seriously while at the same time recognizing that they were grown men playing dress-up.

What made My Chemical Romance the ultimate savior band for so many kids was their absolute authenticity to themselves. Their full dedication and belief in whatever it is they were doing, no matter what other people had to say about it.

The fact that despite everything that was leveled against them they made it.

And for as much as we miss My Chemical Romance, there’s something to be said for the fact that they’ve all outgrown their angst and their demons and are happy now—as relatively normal husbands and fathers. Heck, maybe that’s their last, great defiant act. Finally being normal. Finally being happy.

Even now, they’re still trying to save our lives and telling us to be true to ourselves. And for that, we’re forever grateful. (Even if we do miss their music so much we’re putting a 15-year-old album back on the charts.)

“The future is bulletproof. The aftermath is secondary. It’s time to do it now, and do it loud. Killjoys, make some noise!”