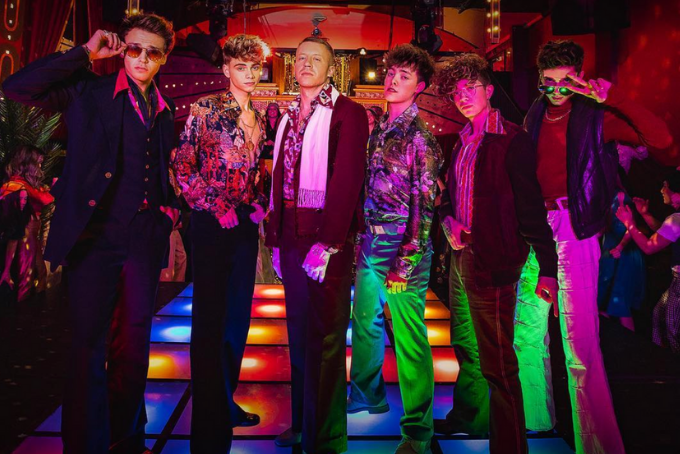 Why Don’t We has dropped yet another hit, and this one’s for the homebodies. The rising boy band released “I Don’t Belong in This Club,” teaming up with Macklemore for this surprise single.

This anti-social and anti-party anthem is the third single the band has released this year following their debut album, 8 Letters, which was released in August of last year. The “Big Plans” empowerers sing about regretting the decision to go out to a club and expressing that they would rather be at home instead.

The visual dropped less than 24 hours after the single’s release with a hilarious 70s twist as the boys and the “Corner Stone” rapper rocked bell-bottom pants and colorful, printed button-ups. The music video kicks off with the band standing in line at a Seattle nightclub singing about cutting lines, paying entry fees, overplaying songs and the feelings of social anxiety while out. Once they’re all finally in the club, it turns into a 70s disco, filled with servers on roller skates and a lit up dance floor where the boys show off their best smooth moves.

“Shoulda stayed on the sofa // Forgot I hate being social // And I miss my ex-girl // This Drake song making me ‘motional // I’m feeling awkward as hell // I only came here to dance,” Macklemore raps as he comes onto the scene going into the club, expressing a sense of dislike for the nightlife and partying scene.

The collab came as a surprise to fans when the song’s hashtag, “#IDBITC,” was teased the day of its release on the band’s Twitter account, followed by the boys tweeting on their own personal accounts. The boy band also released an exclusive IDBITC scarf, which can be purchased here.

The Seattle-based rapper and the up-and-coming boy band haven’t worked together before, and the excitement was apparent. The band has performed Macklemore’s “Ten Million” single as part of their mashup on their Invitation Tour, so we know that they’re definitely fans.

The release came at the perfect time the night before Why Don’t We kicks off their 8 Letters Tour. Make sure to check out the music video below!