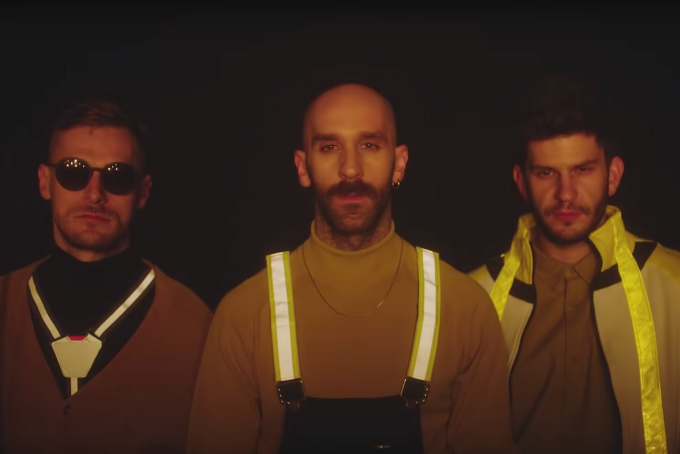 If there is one thing you need to know about X Ambassadors, it’s that they don’t care what you think. The alt-rock trio from Ithaca, New York made that clear in their latest single “Boom” and its accompanying music video. The single arrives as the band is gearing up for a European tour beginning in April.

“Boom” is a groovy funk track, opening with a bass line before the main guitar lick and drums kick in. The accompanying artwork for the single is the word “boom” spelled out in braille. Keyboardist and brother of lead singer Sam Harris, Casey Harris, has been blind since birth, making the single a physical manifestation that he can read. The song focuses on brushing off negativity with lines like, “Why would I sing the blues for you,” and, “Got nothing left to prove to you.” The chorus ends with the line, “My feet go boom boom boom // Walkin’ away from you.”

The music video opens with flashing lights replicating the braille writing before cutting to a shot of the three members: lead singer Sam Harris, keyboardist Casey Harris and drummer Adam Levin. The color scheme of the video sticks to yellow and black, the band’s main colors. The video features shots of the members standing in front of a wall with their shadows projected. Right before the bridge of the song, the video takes a sudden turn, when the sound of breaking glass is heard and the screen cuts to black.

The shot of the band performing returns, with Sam Harris lying on the ground and only his shadow remaining in the individual shots. Levin’s shadow, however, is missing, while Casey’s is shown with wings. A slow pan depicts Sam picking himself up off the ground, with blood on his face. Harris, now seemingly disoriented, with mirror effects added, finishes out the song before the video cuts to a quick shot of the braille writing.

The camera work on the video is great. The visual is full of moving shots, but each is clear and smooth. The dual and triple-screen shots were well-placed and added to the band’s performance, preventing us from feeling like there was too much going on. The change of tone in the bridge is effective—it definitely caught us off guard the first time we watched. The scenes of Sam Harris getting up from the ground after being knocked down pushes the meaning of the song. At first, it felt a bit on the nose, but after viewing it multiple times, it made more sense.

X Ambassadors have been around since 2009 and have worked hard to earn their spots as alt-rock stars. There’s no doubt they’ve had their fair share of haters and critics, and “Boom” is an open letter to all of them. X Ambassadors seem to be approaching a new chapter in their career, and it sounds like they’ve got a lot in store for us.

Take a look at the music video below.