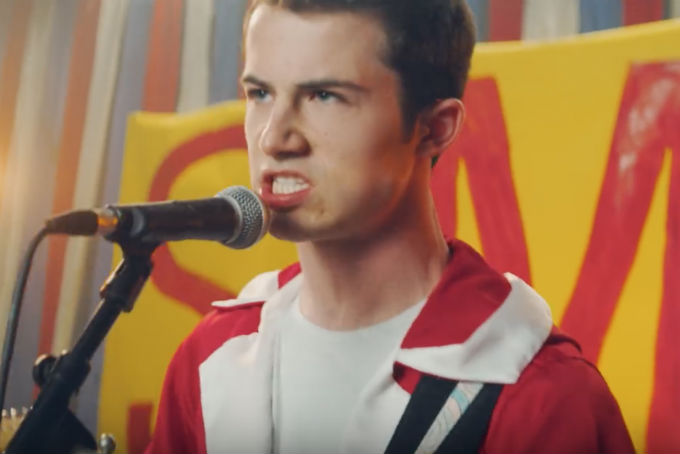 After the release of their debut album Nothing Happens, Wallows dropped a brand new music video for their popular single “Scrawny.” The boys continue to entertain fans through creative content that keeps their discography light and upbeat. The “Scrawny” music video was shot in a very theatrical way as it unpacks metaphors for self doubt and insecurity.

The video casts band member and 13 Reasons Why actor Dylan Minnette as a scrawny boxer preparing to fight someone much stronger than him. Despite his slim chance of winning, he is supported by fellow bandmates Braeden Lemasters and Cole Preston. The three are shown wearing matching Wallows sweatsuits that exert powerful team energy.

The premise of the video reflects the inspiration behind the song quite well. “Scrawny” is about finding self confidence in a world where there will always be someone better than you. Wallows acknowledges that self-comparison marks the death of any positive self-image and encourages everyone to be themselves. Minnette admits to the anxiety centered around his reputation as he sings, “I’ve been sleeping with the light on//I tend to freak myself out//Will you come a little closer now//And tell me I’m a scrawny motherf–ker with a cool hairstyle.” The band pulled this heavy theme together by executing the song in a lighthearted, comedic way. Ironically, the track is meant to be laughed at.

Toward the end of the video, Minnette finally defeats his opponent in the boxing ring in a very unexpected way. After getting beat up time after time, the singer rises up and starts dancing during the fight. The crowd cheers and his opponent falls to the ground in pain. The plot concludes with the powerful lesson that being genuinely oneself will always combat insecurities, criticism and self-comparison.

While on air with Zane Lowe‘s Beats 1 show, Dylan explained, “There was a lot of introspective moments on the album, and that’s cool to us and everything, but we were like, ‘We need something light — something that is borderline funny, just a moment on the album to make people smile.'”

Catch Wallows while you can on the Nothing Happens Tour as they hop around the U.S., and make sure to give the album a listen.