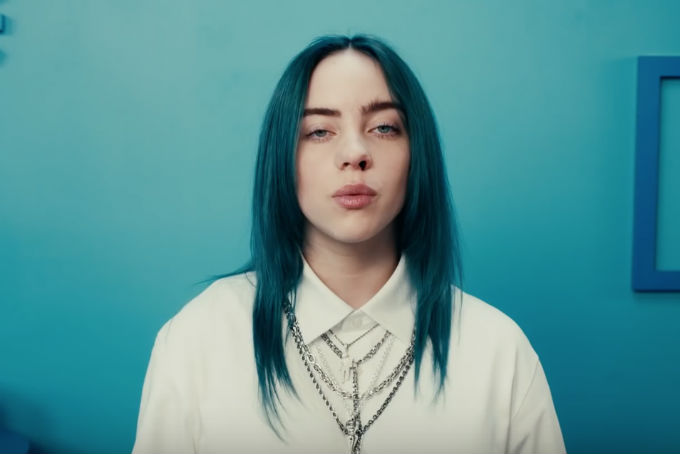 17-year-old singer-songwriter Billie Eilish took the music world by storm back in 2016 with her debut single “Ocean Eyes,” which made her a viral success. Most recently, Eilish is hot off the release of her debut studio album, When We Fall Asleep, Where Do We Go?. The album was produced by Billie and her older brother Finneas O’Connell. The same night the album was released, the first single and music video was dropped. “Bad Guy” is a colorful and sometimes disturbing trip of images all set to one head-nodding hip-hop beat.

“Bad Guy” is more or less about how Billie is the real “bad guy” in the relationship, even though the guy in the song thinks he’s so criminal. She sings in the chorus, “I’m that bad type // Make your mama sad type // Make your girlfriend mad tight // Might seduce your dad type // I’m the bad guy, duh,” proving she’s no goody two shoes.

The video is made up of circus-like colors as Billie dances around in different monochromatic sweats and rolls around the the floor. There’s a contrast between these high energy shots and the parts where Billie is staring down the barrel of the camera with her signature resting bitch face. Some of the imagery errs on the side of fetish-y. In one particular shot, Billie pours milk into the open mouth of a man laying on the ground with a mouth full of cereal.

Towards the end of the song, there’s a shift in tone from this upbeat energy to a sexier, more sultry beat. It’s here that Billie sings the final lines of the song, “I like when you get mad // I guess I’m pretty glad that you’re alone // You said she’s scared of me? // I mean, I don’t see what she sees // But maybe it’s ’cause I’m wearing your cologne.”

In the music video, the scenes change with the shift in tone and we see Billie sitting on top of a man’s back as he does push-ups in a dimly lit hotel room.

Overall, the music video for “Bad Guy” pairs beautifully with the song. It’s visually bizarre, yet stunning at the same time. Eilish is truly a talent, from her lyrics and singing to her video concepts. Despite the fact that she’s only 17 and this is her first album, she truly is an artist through and through. Keep your eyes out for what’s next from Billie because we guarantee you aren’t going to want to miss it.