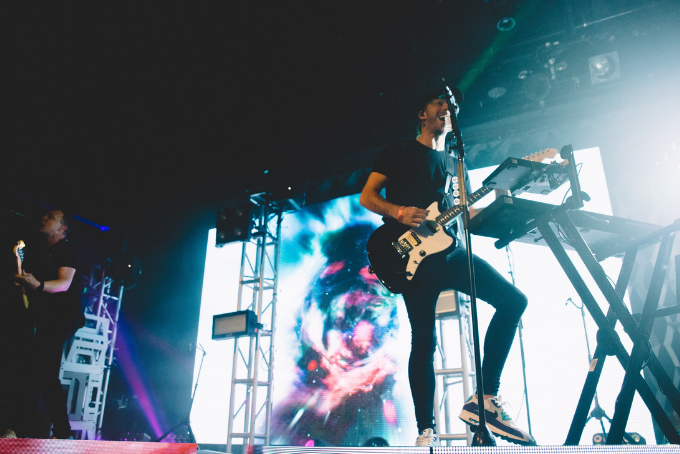 In case you have been living under a rock lately, Mark Hoppus (blink-182, +44) teamed up with his mini-me, Alex Gaskarth (All Time Low) to bring their Trash-Pop project, Simple Creatures to the world. Pop-punk fans have been waiting years for this counterpart duo to start working more closely, ever since the two collaborated on All Time Low’s “Tidal Waves.”

Instead of making fans sit at home and listen to the self-proclaimed Trash-Pop, they brought the music to fans in a few select cities throughout North America and the United Kingdom.

Although April Fool’s Day is for jokes, Simple Creatures were not kidding with their stellar set at Music Hall of Williamsburg in Brooklyn, New York. If you know this duo, you know they both thrive on crazy antics and stage banter, and they definitely did not steer clear of either. When first walking into the venue, fans were treated with ballon creatures, lollipops and a funky photo booth. The environment was definitely otherworldly.

Simple Creatures, unfortunately, had a short set, as they have only released Strange Love, a six-song EP. Though, to not keep it too short, the duo added two other unreleased songs, a Depeche Mode cover and Hoppus even played a few guitar riffs of blink hits! The duo’s infectious stage banter made the night even better.

Check out Sarah Waxberg’s photo gallery of the night below: