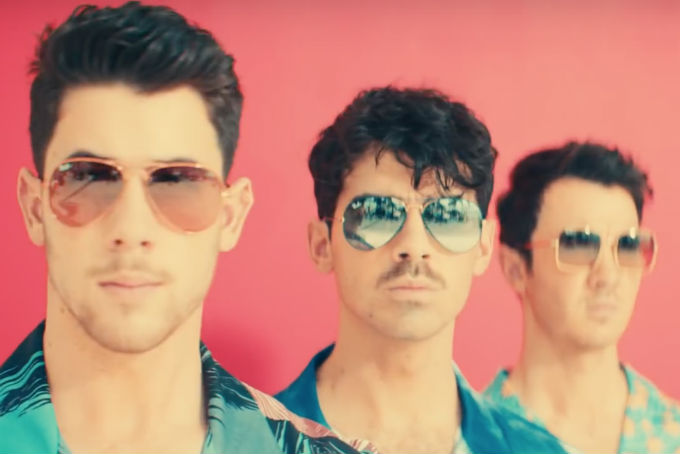 Roughly a month after the Jonas Brothers stole our hearts with their comeback single “Sucker,” the JoBros are back with their second single, which we’re swooning over just as much. The infectious new track, “Cool,” proves yet again that these three brothers are still the coolest family band in the game.

The chill track definitely fulfills the song’s title. It sounds like a track you’d listen to while floating in the pool on a perfect summer day. The music video follows a similar theme, but with an ’80s vibe. For those who haven’t seen it, the video follows the JoBros as they have a concert at a retirement home. Obviously, this is pretty much the least cool way to show that they’re still cool, but it worked nonetheless.

Fans were also pleased when the band made a nod to their hit song “Burnin’ Up” by referencing the iconic red dress in this new hit. The video cuts between the retirement home they’re playing at and scenes with fancy cars, girls lining up for them and the beach. With matching suits, swanky sunglasses and drinks galore, make no mistake — the Jonas Brothers are still so cool.

And if you thought the brothers couldn’t get any more awesome than they’ve already proven to be with their new singles, they debuted “Cool” live Friday night at a Penn State bar called Champs, which just so happens to be Joe’s favorite college bar. The band played a secret show and bought everyone there drinks. Their miniature set included hits such as “Sucker,” “Burnin’ Up,” “S.O.S.,” and their classic cover of Busted‘s “Year 3000.”

Obviously, there are no signs of slowing down for the JoBros; The band has been popping up with these secret shows across the country, including Atlanta and New York City. Plus, they just played their biggest show since reforming in February at the March Madness Music Series presented by Coca-Cola in Minneapolis.

Watch the Jonas Brothers flex on us in their new video for “Cool” HERE: