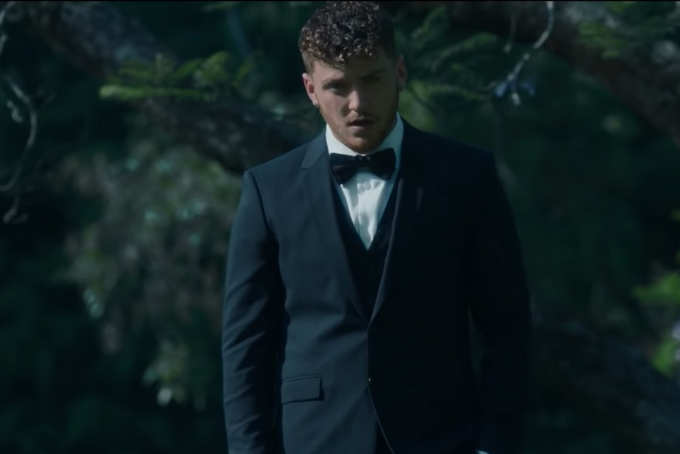 Bazzi keeps the new music coming with his fresh hit “Paradise.” The catchy tune gives us all the summer vibes while reminding us to enjoy the present. Following the success of the 21-year-old’s smashes “Mine,” “Beautiful” featuring Camila Cabello, and “Caught In The Fire,” Bazzi’s ability to deliver a hit is unquestionable.

The lyrics give us the idea that paradise can be found by living in the now. “Enjoying the moment ’cause life move too fast // I’m looking forward, ignoring the past. // These are the times that we’ll laugh looking back.” Using clever angles and pleasing aesthetics, the music video gives us a little taste of paradise in every scene.

Anytime we get to see Bazzi in a suit is a good time. Luckily, the first shot of the music video is exactly that! The scene features the singer-songwriter standing on blue boxes along with a masked quartet also dressed to the nines. Although the sublime tone stays consistent throughout the video, the beauty is definitely in the eye of the beholder. The use of blue undertones makes the video extremely on brand for Bazzi, as it has been his statement color throughout this chapter of his music as he has been calling it “An Era In Blue.”

Some featured scenes included Bazzi and a female lead in matching denim outfits laying on a mirror in the middle of a dreamy forest. Another part of the music video gave us the second best rain makeout scene ever next to the one in The Notebook. Each scene is more heartfelt and dreamlike than the next.

We are excited to see what else Bazzi has in store for us and are confident that his streak of hits is not ending anytime soon! If you want to see the A-list artist perform any of these songs live make sure to catch him at some of the upcoming summer music festivals, including Coachella, Hangout Fest and more!