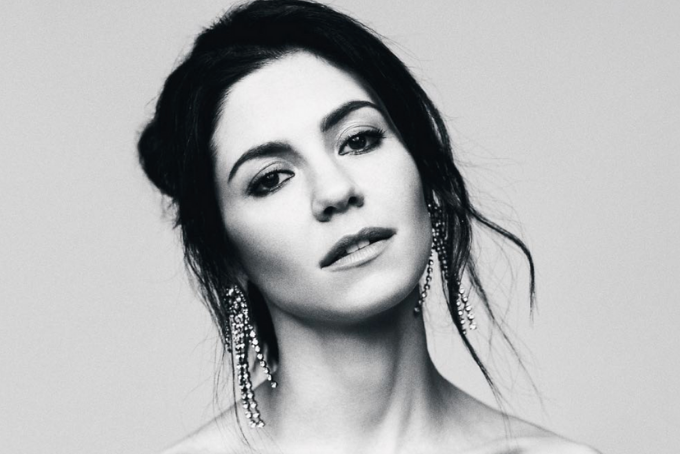 When Marina Diamandis axed “the Diamonds” from her stage name, it seemed almost like she was shedding her skin and braving a new beginning. In 2012, she became the epitome of angst-filled love when her second album Electra Heart became a classic among fans. It wasn’t long before “Primadonna” was blasting from every teen’s speakers, becoming the theme song to their wildest, lovesick fantasies.

She cultivated a dedicated fanbase, maintaining the face of a glorified Tumblr aesthetic. So when she fell silent after her third album Froot, loyal listeners wondered when she’d make her highly-anticipated return. Frequently taking social media breaks, Marina took time for mental and emotional healing. It’s a testament to the demanding work ethic of musicians, constantly creating vulnerable art to satisfy not only them but their fans.

Her latest album LOVE is the first half of a two-part concept LP titled LOVE + FEAR meant to be released on April 26. Marina decided to give fans a listen a few weeks early, allowing them a sneak peek into the emotions she’s experienced the past four years.

I created “LOVE + FEAR” as 2 separate records to be listened to individually.

I'm releasing “LOVE” today so you can listen to it in full before we move onto “FEAR”. Enjoy it here! https://t.co/YpTI1FDYmS pic.twitter.com/IaZ4YcXSkw

She opens with “Handmade Heaven,” an intimate admiration of the nature around her, echoing a sentiment of appreciation for the tiny details rather than materialistic possessions. She transitions into “Superstar,” basking in a love so great—something we wouldn’t expect from the signature “How to Be a Heartbreaker” singer.

“Orange Trees” delves into the artist’s Greek roots, describing her feelings of freedom and happiness when reminiscing about her homeland. It’s groovy and dance-filled, exploring a bright joy.

I wrote “Orange Trees” about the island that my family and I are from in Greece. It’s called Lefkada and it’s my favourite place in the world… I always feel at peace there. It’s like my body/ biology recognises I’m back home. Hope this song makes your summer sweeter than ever. 🍊 Love. M | ‘LOVE + FEAR’ All female Creative Team | Photography by @zoeygrossman Styled by @mercedesnatalia Makeup by @katelingan Hair by @marissa.marino

Despite Marina’s massive success, her brief hiatus after Froot was almost her exit from the music industry. In LOVE‘s fifth track “Enjoy Your Life,” she reminds herself to face her problems and embrace the good. While its purpose was meant to serve an unhappy Marina, its lyrics and beat wave an uplifting flag for forgiving one’s self.

“I wanted to write a song that was genuinely uplifting and that would encourage me to relax more and accept the problems that I have" https://t.co/YpTI1FDYmS” pic.twitter.com/So7QiuzdPC

Later on, she delivers an emotional ballad with “To Be Human,” a testament to today’s divided political and social climates. “I think when I was writing that I wanted to create this picture of humanity, because in our political climate we are constantly being made to see other people as “other,” Marina said. “If you’re from a different culture, you’re seen as different and potentially dangerous and I really hate that.”

"It’s probably the most important song on the record for me" https://t.co/YpTI1FDYmS pic.twitter.com/JRbRM8yvc2

Rounding out the record is “End of the Earth,” an elegant, synth-pop banger. It’s a slow jam but bursting with positive energy—she insists her love will persist even if this part of her musical journey is ending. It sets the tone for a thrilling and possibly heart-wrenching second half in FEAR.

This is like a sister song to “To Be Human”. It highlights the unity of being part of the human race and relates it to loving somebody infinitely.

Marina has trekked through battles with depression and anxiety, causing her to almost leave the demanding nature of the music industry. While her four-year break from creating any new art left a gaping hole in many devoted followers, it was much needed.

She came back with a newfound love—a passion for making a difference with meaningful lyrics. She delved deep into the most revealing parts of her heart and opened up a hopeful beginning into a new persona that’s completely her own. She’s no longer Marina and the Diamonds—she’s Marina at her finest and brightest.