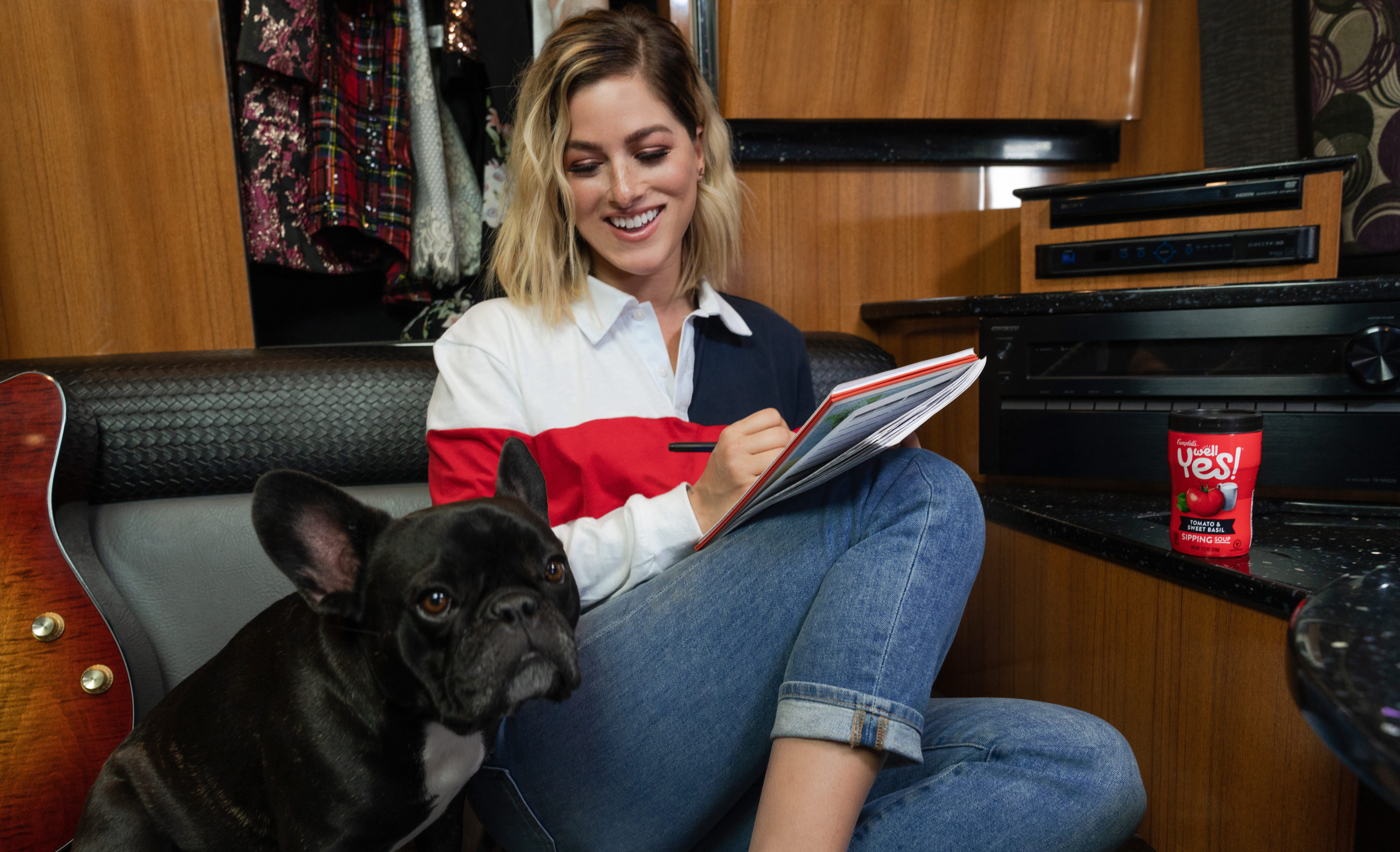 Trailblazer.
noun
A person who makes a new track through wild country.

You could say it’s a fitting word to describe country singer Cassadee Pope. In 2017, she parted ways with her record label, her fiancé and her team, giving her the opportunity to start fresh and build the foundation of her future from the ground up.

Only four months into 2019, the 29-year-old dropped a new single with nearly 3 million Spotify streams, released her sophomore album stages, served as the opening act on Maren Morris‘s Girl World Tour, and now she’s taking the CMT Next Women of Country Tour across the U.S. and over to the U.K. as the headliner with special guests Clare Dunn and Hannah Ellis — and she’s done it all as an independent artist.

We spoke with Cassadee all about the inspiration behind Stages, her bold move to make music on her own terms, her upcoming tour and partnership with Campbell’s Soup (more to come), and the encouraging, but honest, advice she has about creating an album independently for her peers in country music.

Congratulations on such an incredible start to 2019! You released your second full-length album, Stages, and you have a pretty intense touring schedule lined up! With just one listen, it’s clear this is your most personal release so far. Can you give us a backstage view of what inspired the album?

I went through a lot of big changes in 2017. There were a lot of personal and professional changes and my whole life sort of had this big purge. I thought, “I could sit in this and feel it out,” and I did and definitely let myself sit in the pain for a while, but I also didn’t let that opportunity slide by. I wrote about it and recorded music with my producer and made sure that I was staying creative through the process. I’m so glad I did because a lot of the songs that are on the record are from those tough times.

At first I just wanted those songs to be something I had in my back pocket and to show around town, maybe to some labels. And then I started getting to the point where my story was changing. I met somebody new and I was getting into a really good place and I wanted that to be part of the story on this project.

You released this album as an independent artist, which was a really bold move and a true testament to what it’s like to be a female in the country music industry. In hindsight, it obviously worked out and it’s been a success, but what was the most nerve-wracking part of putting Stages together and what were your fears leading up to the release?

I think it was just a different process for me. So while it was really freeing and exciting and I was making all the decisions, it was also really scary because I didn’t have any pushback. I didn’t have anybody telling me the reasons why it wouldn’t work or why this song might not connect with this person in this part of the country. I didn’t have a lot of that. I just had a lot of encouragement, and my team is great and they give me criticism when I need it. But, there’s not a lot of overthinking and there’s not a lot of things that you usually get with a label so that was kind of nerve-wracking.

Also just seeing all of the money go out. I’m paying for all of this self-funded, so that’s really crazy to see. You’re looking at your bank account like, ‘oh my gosh, I’m investing all of this into myself.’ That’s scary because it could end up not coming back. So, that’s definitely an aspect that makes it scary as well, but for the most part, I was just really excited to get new music out again.

Stages actually isn’t the first project you’ve released independently. Did you feel more confident and experienced this time around compared to when you were making your 2012 self-titled EP in between Hey Monday going on hiatus and The Voice?

Yeah, definitely! I had more of a direction for this record, whereas that EP was me wanting to do something, anything to get my foot in the door in the industry in L.A. and I was trying to set myself apart from my band that I was in. I didn’t really have a specific genre in mind for that. It’s sort of all over the place and you can kind of hear it. I love the EP but there’s no real direction musically. This record was just more focused. There was definitely more of a story to be told. I had more material to write about. There’s a lot of big differences between the two for sure.

Was there a particular song on stages that you were especially nervous about the world hearing when it was released?

I think “F.Y.I” was that one for me. It’s an emotion I felt that’s a little bit spiteful and not my best emotion I’ve ever felt. It’s a bit of an ‘oh, I’m kind of ashamed that I felt that way at one point and time.’ But, it was also a song I felt was really important for the story and it was just another aspect of what happened.

Women in country music are starting to band together in a way we haven’t always seen before. There’s more women speaking out, all girl tour acts and more female duets and features like RaeLynn, Lauren Alaina and Lindsay Ell contributing vocals to “Distracted,” a track on your album. What’s the best part about not being the only girl in the room?

It’s really just sharing a perspective with someone else. I’m usually a sounding board for the guys when it comes to talking about relationships or life, and to have somebody else in the room who can also contribute to the conversation from my point of view is really great. It’s fun too because not all women are the same, but having an open discussion about things with somebody else that shares a little bit of perspective is really helpful. It makes me feel like I’ve got extra backup and we can really talk about things in a more open way because I’m not the only one standing for the women in the room.

We’re always stronger together! What piece of advice would you give to your female peers considering taking the same path you’ve carved while making this record independently?

I think it’s important to trust yourself. It’s really hard to do that when you have a lot of people that have very strong opinions about how you should sound and what you should say. It’s hard and I would be lying if I said you’re not going to waver on that journey. Trusting yourself is really important because if you don’t trust yourself, people can really sink their teeth into you and get you to do things or say things that you might not say otherwise if you were just following your gut.

Also, just surround yourself with people that keep you grounded and aren’t afraid to tell you their opinion, but in a way that’s constructive and not steering you in the wrong direction. I love my team that I have now because they’re not afraid to tell me what they think, but if they know something is really important to me or a specific song is something that I really want to put out that’s all that matters. They want me to do things that are meaningful to me and feel intentional.

You can stream Stages on Spotify and Apple Music now.

One thought on “Exclusive: Cassadee Pope Opens Up About Her Fears as an Independent Artist and the Importance of Women in Country Music”