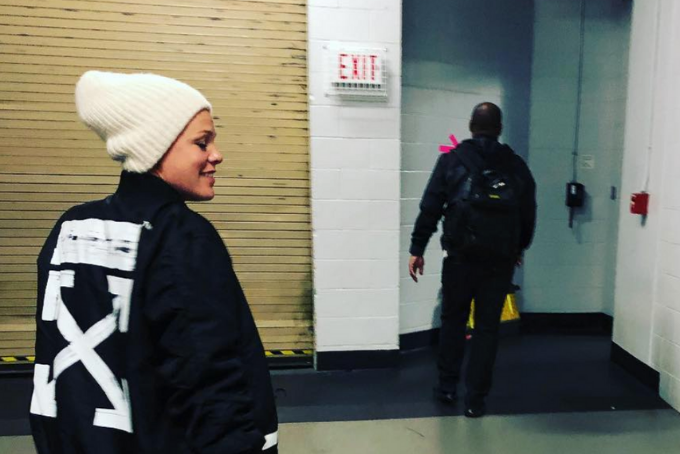 P!nk‘s not slowing down before her album, Hurts 2B Human, drops at the end of the month. She just released her third single from the LP, “Can We Pretend,” with the electronic trio Cash Cash. On April 10, she started teasing the track and released it the next day. We have to admit, it’s been on repeat since.

"Can we pretend that we both like the president?" Watch the #CanWePretend lyric video! 👉https://t.co/rSnzNHDUCy” pic.twitter.com/cNVlyqItbL

The song is different than what longtime P!nk fans would expect, but in a good way. Of course, her vocals are stellar as usual. The track describes a lost love from her past and the nostalgia of being 22 and in love. Electronic and EDM vibes come into play with Cash Cash’s help.

However, this isn’t Cash Cash’s first brush with P!nk. The group remixed the smash hit from her last album, Beautiful Trauma, “What About Us.”

Giving everyone a little more of #H2BH! "Can We Pretend" feat @cashcash out tomorrow ⏰8AM EST / 1PM GMT / 10PM AEDT

P!nk’s album, Hurts 2B Human, is out on April 26 via RCA Records. The album features collaborations with Khalid and Chris Stapleton in addition to “Can We Pretend.” The record’s tracklist can be found here.

On top of the release, P!nk is currently on the last leg of her Beautiful Trauma World Tour, traveling across the US and into Europe from now until August. You can find dates and tickets on her website.

Don’t forget to watch P!nk and Cash Cash’s lyric video for “Can We Pretend” below: