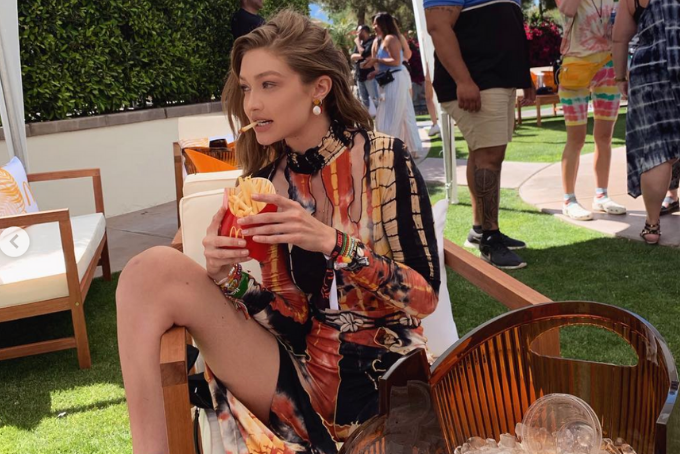 Festival season 2019 has officially begun! As always, we start out the season in the desert of California with Coachella. Coachella is known for its massive pull for music royalty à la Beyonce and Jay-Z. Even though Queen Bey isn’t slotted to perform this year, the 2019 lineup once again brought all music lovers to the desert for an unforgettable weekend.

The only thing more iconic than the music of Coachella is the fashion. It is unofficially dubbed the most Instagram-able festival of them all. You have beautiful people wearing outlandish outfits to stunt for the gram and we ate it up all weekend long.

So, if you can’t make it to Coachella 2019, you can sit in the comfort of your PJs, turn on the live stream, scroll through some of these weekend one looks and feel like you’re right there with them.

Makeup guru James Charles rocked an all-white outfit with chaps to show off his assets.

DAY 2 🍑 no razor bumps in sight

Gigi is the ultimate cool girl in this paired back separates outfit. It’s true—being one of the biggest supermodels in the world means you CAN rock anything.

V-Hudge is known to never miss a Coachella, and as always, she didn’t disappoint in this boho dream!

Hotel heiress Paris Hilton is not known to keep it simple, and Coachella was no exception. Paris showed off her killer figure with a white bra and panties set with a feather boa. Who would expect anything less from Miss Hilton?

Ashley Tisdale is a long way from her days on The Suite Life of Zach and Cody, but she’s all grown up and showing off her Ari-inspired pierced braid, perfect for those hot festival days.

Ring the alarm 🚨 My hair + makeup is goals @sexyhair @makeupbyhaileyhoff

YouTube stars Ethan and Grayson Dolan are known to be loud and wild on their YouTube channel, and it looks like they’re bringing that same energy to Coachella this year. Let’s just say seeing double isn’t so bad with these two.

Kacey Musgraves brought Instagram sensation Baddie Winkle on stage during her performance at Coachella, giving us this memorable photo of the colorful pair. Kacey wore a fringed Balmain dress and Baddie Winkle strutted her stuff in this Technicolor flower dress. We just can’t get enough of these two!

Tell us who sported some of your favorite festival looks in the comments below or tweet us @soundigest!