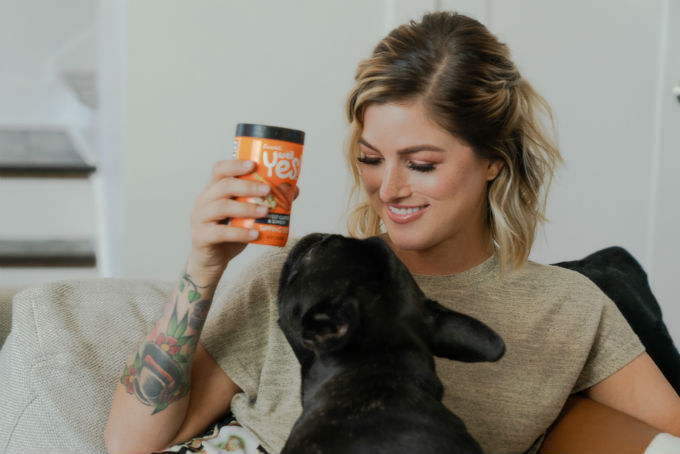 In our last interview with Cassadee Pope, she unveiled the stories behind her sophomore album, Stages. Now, she’s taking those stories on the road.

Just 24 hours before her opening night as the headliner of the CMT Next Women of Country Tour, we chatted with Cassadee about her crazy lineup of performances, how she’s staying healthy on the road, and of course, her prank on Maren Morris on her last night on the Girl World Tour.

It’s been two months since you released your second full-length album as an independent artist, and you’ve spent the last month touring with Maren Morris on her Girl World Tour. Now that you’ve taken Stages to quite a few literal stages across the country, what song has been your favorite to perform?

So far, “How I Feel Right Now” is my favorite. It’s just fun and I’m absolutely happy when I sing it! It reminds me of the good feelings that I’m feeling. Also, I haven’t played it live yet, but at rehearsals for the CMT Next Women of Country Tour, “F.Y.I.” felt really good so I think that’s going to translate really well live.

How have the fans reacted to Stages and hearing the songs live so far?

They’ve reacted amazingly! Opening for the Maren Morris’ Girl World Tour was one of the first times I’ve been able to play more new songs on the road. I definitely perform them differently than my old stuff because I’m a little bit more excited to play the new ones, and I think that in turn makes them a lot stronger.

It’s cool to see them online reacting to the songs. There’s some that are streaming better than I expected or selling better than I expected. You never know until you release the music how it’s going to interact. The last song on the record, [“I’ve Been Good”], is doing really well, so I’m like “oh! I didn’t expect that!” It’s just really fun to see how that all unfolds.

How does it feel to look back at the beginning stages of making this album and not really knowing what would come of it versus now being the headliner of the CMT Next Women of Country tour?

It’s pretty unbelievable! I felt really, really strongly about making this record on my own and singing on my own, and I think somewhere deep inside I knew it would take me somewhere really special. A lot of people were trying to encourage me to get a label involved or get somebody involved to help me out financially with it and I just really felt strongly about doing it on my own.

I knew somewhere deep down it would end up producing this amazing journey. I’m really glad I stuck with it because I couldn’t think of a better place to be right now. I’m having so much fun and these tours have been incredible and I’m excited to do my first headliner in years. It feels really validating, for sure!

With such a crazy lineup of performances you have this year with Maren Morris and taking the CMT Next Women of Country across to the U.K., what are you doing to prioritize your health while being on the road?

I only allow things that are nutritious and good for me on the bus. Obviously, the band can eat whatever they want, but I try to be pretty strict on what I have and Campbell’s Well Yes! Sipping Soups have been great for that. They’re good for when I’m in a hurry too because I know the days on this tour are going to be a little jam packed with the meet and greets, just getting ready for the show and there’s some Vera Bradley visits at their stores. I try to get to the gym whenever I can and drinking a lot of water is important! I usually try to do those things and they contribute to a pretty healthy lifestyle on the road.

Can you tell us a bit about any projects you have planned for after the Next Women of Country tour?

There’s definitely some meetings that are happening right now as far as expanding the team, so I think that will affect what’s coming next. I’m also writing because there’s a lot of things happening in my life right now that I’d love to get off my chest. While I don’t have any concrete plans within the next few months, I could see something next year around this time or even later that would be more about what my life has been like recently. I stay creative for sure but I’m not moving on from this record for a minute.

Yeah, it’s well deserved! And last but not least, you’ve got to tell us about how you pranked Maren Morris on your last show with her.

That was so funny! I’ve done this prank a lot through the years and it’s just never not funny. I got her merch guy to dress like me in basically the same outfit I wore that night. I had him come up during “All My Favorite People” in my place, and he was lip-synching as I was actually singing side stage. She was so in shock she stopped singing! She was looking around trying to find me. It was so good. Eventually I came out and I finished the song with her, but I had to prank her. It’s against everything I learned touring since I was 18 to not prank the headliner, but it was so funny.

Is Cassadee coming to a city near you? You don’t want to miss her. Find out and get your tickets to the CMT Next Women of Country Tour!