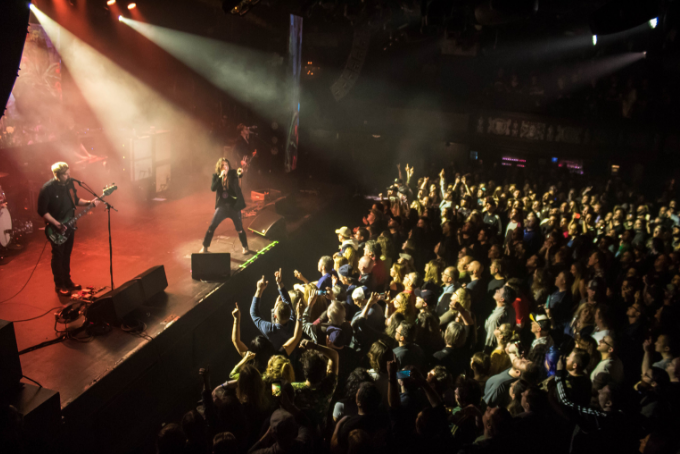 After being introduced to Rival Sons a few months ago by a friend, I was hooked. In a world dominated by pop and hip-hop music, it’s difficult to find that classic rock ‘n’ roll sound that once existed in the 70s. Long Beach-based hard rock group brings that classic sound back into the lost scene. I got the chance to catch them live in Boston last Thursday, April 18, on their Feral Roots tour supporting their new album.

As soon as I stepped inside The Royale, it was obvious that I was the youngest one there. All around the venue stood older men sporting motorcycle jackets with long gray beards and women with classic rock band t-shirts and colorful hair. The sold-out crowd seemed to strictly drink beer—I got a few funny looks while holding my tequila sunrise with a cherry on top. Not that I’ve experienced it, but it definitely could have been mistaken for a Deep Purple or Black Sabbath show (both of which Rival Sons have toured with in the past). The group was joined by the southern-influenced Canadian rock band The Sheepdogs, who opened the night with a country-style party brought to you by frontman Ewan Currie rocking an oversized cowboy hat.

Rival Sons’ set was accompanied by an LCD screen backdrop of their beautifully designed Feral Roots album cover. The stage was foggy as they first broke into “Back In The Woods.” All of the band members were lively and passionate in their movements. Singer Jay Buchanan, however, had some of the craziest dance moves I’ve ever seen. He dramatically glided across the stage from song-to-song constantly spinning, kicking, and posing. The band played plenty of hits from their new album such as “Sugar on the Bone,” “Too Bad,” and of course they ended with crowd-favorite “Do Your Worst.” The night also had something for older fans like “Electric Man,” and “Torture.” Only a few songs into the set, every band member’s hair was soaked with sweat as a result of giving the audience their all.

The night took an emotional turn when Jay Buchanan announced they were going to play their popular ballad next. “Over the years people come up to us and the show us the tattoos they got of this song on their arms and neck. There’s a reason we put this song on the set every night. Maybe you needed it last year, maybe you need it tonight, maybe you’re gonna need it next week. If you need this one tonight, then every single person in this room is going to help you right now. This is your time. This song is for you. This is for you. This is ‘Jordan.’”

He performed the entire beginning of the track crouched down in his zone at center stage, avoiding eye contact with the audience. He stood up as the song’s intensity progressed, instantly giving the crowd chills.

Rival Sons came back for an encore and played “Shooting Stars,” the ultimate track on Feral Roots. They ended with “Keep on Swinging,” and as Scott Holiday shredded an impressive guitar solo, the room held up their hands up in a horn-like solute.

This was definitely a night filled with some good old rock ‘n’ roll. Earlier in the set, Buchanan said “People try and say that rock ‘n’ roll is bad, but you spent your money on something very real tonight. You didn’t spend it on Spotify or iTunes. Boston wanted the real thing.”

Rival Sons, you succeeded because Boston definitely got the real thing.

See Rival Sons’ full set-list below as well as photos from the show. Be sure to also catch them at one of the remaining stops on their tour.