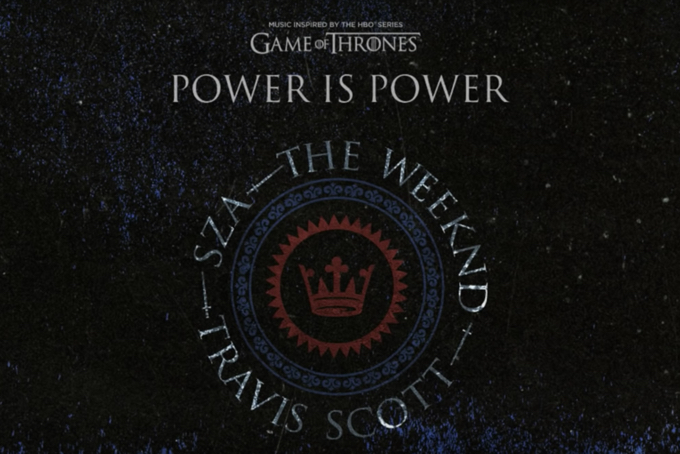 Cersei Lannister once said, “When you play the game of thrones, you win or you die,” and that concept is culminating as we speak on the eighth and final season of Game of Thrones. As if the fact that winter is finally here isn’t exciting enough, HBO and Columbia Records announced an official compilation album, For the Throne, loaded with heavy-hitter artists and songs inspired by the TV show. The first two singles, Maren Morris‘ “Kingdom of One” and The Lumineers‘ “Nightshade,” are glorious in their own right, but no one was expecting a certain trio of hip-hop and R&B’s brightest stars to band together for their own GoT-inspired track.

In a move that even the most avid fans never saw coming, The Weeknd, Sza and Travis Scott joined forces to teach us how to bear heavy crowns with ease in their “Power is Power” single.

heavy is the crown… but only for the weak. POWER IS POWER 4/18 #GAMEOFTHRONES been watching this show since 2011… my fans know! 🐺🐺🐺 didn’t think twice ! pic.twitter.com/Z8CrBJlMVc

For starters, Abel Tesfaye, better known as The Weeknd, is famously a massive Game of Thrones fan and admitted that he didn’t have to think twice before contributing to the project. Tesfaye is no stranger to soundtracks, having assisted Kendrick Lamar in 2018’s incredible Black Panther album. As a matter of fact, fans have noted many parallels between “Power is Power” and Lamar’s “Pray for Me,” which features The Weeknd’s vocals in the chorus. Both tracks share similar drum patterns and hefty 808’s that accompany resilient, headstrong lyrics—lyrics which, in this case, were primarily inspired by another infamous Cersei Lannister quote from season two of the series.

While we might have heard this sound from Tesfaye before, his velvety voice is better complemented by Sza’s equally stunning vocal abilities. As the one and only “Queen” of the track, Sza proves to be the perfect counterpart to The Weeknd’s melancholic disposition. The duo makes heavy references to many popular GoT elements (winter wolves, knives in hearts, ice and snow), particularly relating to our ever reluctant hero Jon Snow, who knows a thing or two about just how heavy a crown can get.

“Power is Power” plays as a solid track with the aforementioned vocalists riding the hefty production as fluidly as Daenerys rides her dragons, and the song could easily do without the third featured name. While the Astroworld rapper has found his niche within a superficial auto-tuned aesthetic, it doesn’t quite fit when paired with the Game of Thrones ambiance or his more vocally-adept collaborators.

For the Throne will drop in-full on April 26, but while we wait for the impending official music video that the stars have been teasing on Instagram, you can listen to “Power is Power” below and decide who bears their crown best.