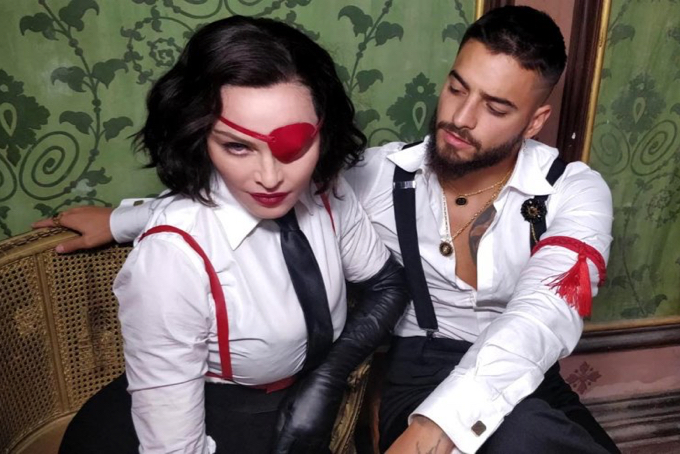 Madonna truly is the musical gift that keeps on giving. Throughout a career, which spans almost four decades, the Queen of Pop has supplied us with enough catchy tunes and iconic videos to last a lifetime. The drop of her 1983 eponymous debut album spawned solo hit after solo hit and it was all uphill from there. Yet, somewhere along the mid-2000s, Madge realized that success is best when it’s shared and we started seeing names like Justin Timberlake, M.I.A., Nicki Minaj and Lil Wayne pop up on her official singles. Keeping that same energy in 2019, the first single from the upcoming Madame X album gifted us with some Latin flavor courtesy of Colombian heartthrob Maluma — and he’s not afraid to get steamy with Madonna in the music video for “Medellin.”

Directed by Diana Kunst and Mau Morgó, the video begins with the pop legend praying in a church, which is an unmistakable callback to her 1989 controversial classic, “Like a Prayer.” The theatrical scene serves as an explanation for the title of her impending 14th studio album, with the final lines being, “From now on, I am Madame X. And Madame X loves to dance… Because you cannot hit a moving target.” The video maintains the same dramatic, artsy aesthetic throughout its first half, and things get particularly provocative when Maluma joins the mix in the dance studio sequence. The Latin superstar indulges in the risqué visuals with a confidence that almost makes you forget how he’s completely overwhelmed by the fact that he’s featured on a Madonna song.

The second half delves into a wedding celebration for the ages. Madame X is now a bride, in a white cowboy hat and matching eye patch nonetheless. The party sequence is a kaleidoscope of colors and phenomenal outfits that compliment the celebratory choreography. Before you know it, the pair is riding off into the wilderness on horseback, with Maluma planting a sweet kiss on his collaborator’s forehead before the video comes to a close. The track may not be the dance floor staple that Madonna fans are accustomed to, but it’s a sleek introduction to a new era in the 60-year-old’s career, and “Medellin” certainly does work best when coupled with its visuals.

Madame X drops on June 14 and boasts features from other current popular artists, such as Quavo, Swae Lee, Diplo, and Brazilian singer Anitta. Until then, you can watch the music video for “Medellin” below and decide where it ranks on the Queen of Pop’s extensive videography.