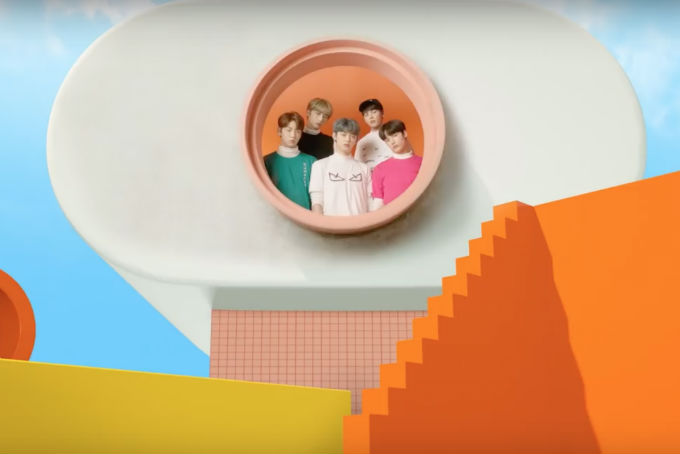 Big Hit Entertainment’s newest boy group, Tomorrow X Together (A.K.A. TXT) has released a music video for “Cat & Dog.” The track is from the group’s debut album, The Dream Chapter: Star.

The video is both fun and playful, and majority of the scenes in the video are on pastel sets, which contrasts with the hip-hop track. The video shows off TXT‘s dance skills and synchronicity with each other. The largest focus of the video is placed on them emulating pets and sporting photo filter cat and dog ears. The choreography plays on this as well, with the members often mimicking cats and dogs.

Some of the more dream-like sequences in the video include the boys riding a bed in a field and sitting atop a stack of furniture on a beach. The quintet poses around a box of dog treats and dances in a spacious hall, keeping the attention focused on their routine. Then, the video makes a sudden change to a darker set with shots of the members dancing under neon lights.

The sequence is well-shot, with scenes switching seamlessly between settings. The change from the pastel color scheme is a bit sudden and changes the vibe of the song. However, since the shift is kept clean and simple, it totally works. As if the video couldn’t be any cuter, it finishes with each member cuddling and playing with puppies and kittens. Aww!

“Cat & Dog” fits the image the group is creating very well; youthful and fun, with tinges of hip-hop edge. The choreography shows this as well, with precision and child-like nature. We would’ve preferred to see the entire video stick with the pastel color scheme, rather than the sudden switch to dark and neon. But despite that, the video is engaging and will have you putting up some paws and singing along — just as it was intended to.

Be sure to check out the music video for “Cat & Dog” HERE: