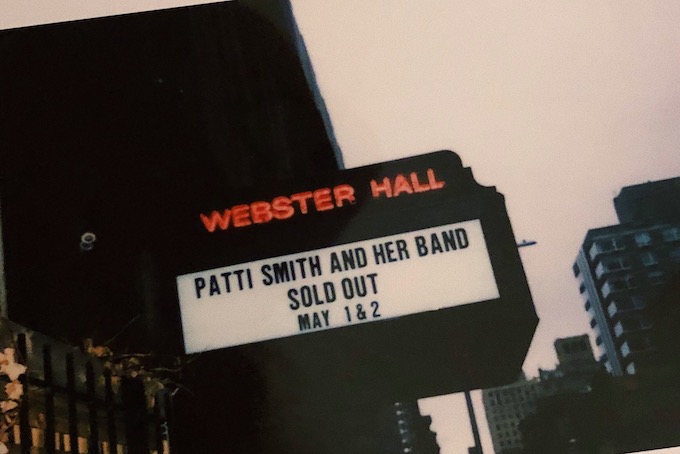 New York City legend Patti Smith rocked the house at Webster Hall on Thursday, May 2. The singer, writer and artist just finished a short run of shows across the Northeast, ending the week with two sold-out concerts at the newly renovated Webster Hall.

The shows sold out almost immediately after they went on sale, which is a testament to how passionate Smith’s fans are. The line to get in stretched up the block, with fans anxiously waiting to get inside. Webster Hall filled up fast, with people of all ages packing into the ballroom — many for the second night in a row.

Before the music started, Smith’s daughter, Jesse Paris, spoke to the sold-out crowd about her non-profit organization Pathway to Paris. Pathway to Paris works to bring together musicians, artists, activists and lawmakers to turn the Paris agreement to action. It was clear that climate change is an issue that everyone on stage is passionate about, and it’s admirable to see musicians using their platform to spark change through action.

This is last night in New York. I am still smiling. Thank you all for everything. i am taking a rest today. Allowing myself to just feel happy for many missions accomplished.

After Smith’s powerful speech, REM‘s Michael Stipe took the stage. Rather than playing REM songs, Stipe played three new compositions. He proudly boasted that they were the first songs written entirely on his own.

It wasn’t long after that Patti Smith took her stage. As soon as the music began, the crowd was on their feet. Smith opened with “April Fool,” playing a nearly two-hour set afterwards. Whether she was playing original hits, like “Dancing Barefoot” or “Gloria: In Excelsis Deo,” or covering The Rolling Stones, everyone was cheering, dancing and having a blast.

Smith’s sold-out shows were among the first at the newly-renovated Webster Hall. The venue, an East Village landmark, was purchased by AEG/Barclays in 2017. Following the purchase, the iconic venue shut its doors for two years before reopening this spring, and personally, we’re so glad Patti got to be a part of it.