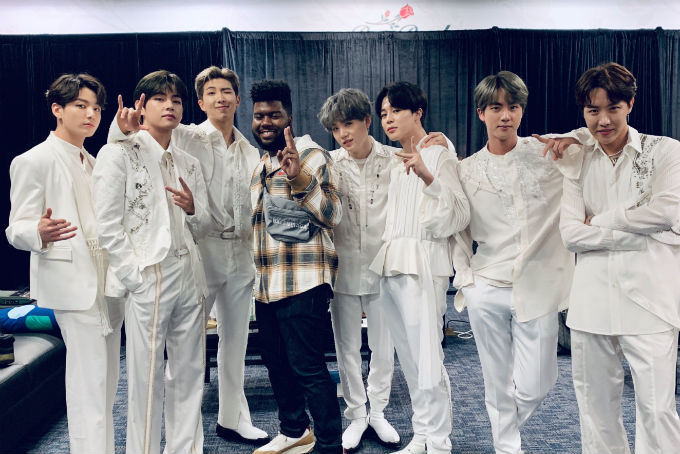 A.R.M.Y., are you ready for another BTS collaboration? On May 5, the K-pop group shared a photo of them with R&B star Khalid. The photo was taken backstage at their sold-out show at the Rose Bowl in Pasadena, California.

As expected, the internet freaked out over the possibility of a collaboration between the megastars. During their time in Los Angeles, BTS were guests on 102.7 KIIS-FM. During the interview with host Jojo Wright, the group was asked about who they would like to collaborate with next. The K-pop superstars have already worked with Steve Aoki, Nicki Minaj, Halsey, and Ed Sheeran in the past.

In response, group leader and rapper RM said that they will soon be working with Khalid on a new project. How exciting is that?!

“I have to mention Khalid. Our friend. It is really happening. So please stay tuned to our Khalid collaboration,” he said.

BTS is currently in the middle of their Love Yourself: Speak Yourself World Tour. The group is wrapping up shows in the United States before going to South America, Europe and finishing in Japan. They are currently riding on a wave of renewed worldwide popularity, playing sold-out arena and stadium shows and topping album charts all over the world with their newest release, Map of the Soul: Persona.

Khalid recently released his sophomore album Free Spirit, following up his critically acclaimed debut album American Teen and 2018’s Suncity EP. The singer will be embarking on his Free Spirit World Tour with a show on May 18 in Alabama. The tour will pick up again in June with dates all across North America. Then, in September, he will be traveling to Europe until November, finishing up with two shows in Australia.

On May 10, Khalid announced the founding of The Great Khalid Foundation in his hometown of El Paso, Texas. The foundation is a music and fine arts organization focused on helping underserved communities. On the foundation’s website, it states that the organization’s goal is to create “an atmosphere of support and freedom for kids to dream BIG!”

“Through our music education programs, scholarship awards, and gift giveaways we are investing in our children and in their future,” the site also added.

Well, seems like we certainly have a lot to look forward to, doesn’t it?